Why the Parole Board Cares About My Relationship Status

When I walked into my third date with the parole board, I thought that over our previous two dates together, covering the past twenty-five years, we had developed a routine. They would question me about my crime, my programming, and my plans for housing and work if released. I would attempt to convey the authenticity and depth of the guilt I feel for taking a life, and what taking responsibility for my actions means to me. The majority of our time together is spent talking about the details of my crime. It is a struggle to find a way to interject how my hope for some form of spiritual redemption compels me to constantly strive to perform little acts of selflessness and kindness, both in my job and daily life.

A parole board’s job is to protect the public while also providing meaningful consideration for release. I shattered the lives of a lot of people when I took a life with an act of violence. I do not envy the parole board’s job of somehow measuring a person’s repentance using an old file and a one-hour meeting with an inmate who is a stranger to them. They have a large caseload and there are only so many hours in the day. By our third date, I thought I knew the routine. I was wrong.

At one point towards the end of our time together I was talking about my possible future job prospects, then I was asked a question I was not quite prepared to answer. I was asked how I would conduct myself in a future romantic relationship. Since I am in prison for taking the life of my ex-girlfriend when I was seventeen years old, maybe this question should not have surprised me. The first answer that went through my mind was not an answer I could give them. I have been single for my entire incarceration, so the answer I wanted to give was “I don’t know.”

A number of years ago two members of the parole board actually taught a class at my institution about how to conduct oneself during a hearing. I was not in the class but asked many questions of the guys who were. One thing was very clear, the parole board will not accept “I don’t know” as an answer. So I said, “I’m not sure. I’ve been single this whole time, so I’m not sure since I haven’t been in a relationship for so long.” I knew this was also not a completely acceptable answer either, but how to expand my point, especially since I smelled a trap? 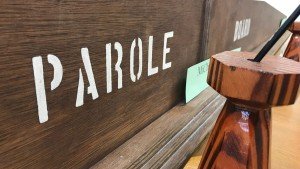 Over the years I have collected a few stories about people seeing the parole board and know that relationships that have started while in prison are always areas of contention. The board does not take kindly to romances behind prison walls. Brian and Tommy were the stories that flashed through my mind.

Through a friend of a friend, Brian got a pen pal. As the years passed the pen pal relationship moved well into friendship, and then romance. While still serving his sentence, Brian and his partner Sara got married. After numerous dates with the parole board, Brian was granted a release. However, his plans to live with his wife were dashed when the board told him that because they met while he was incarcerated there is no way he would be released to her. Brian was eventually sent to live in a half-way house. [Editor: A half-way house is a temporary living facility with services to get people who were recently released back on their feet] He spent one day in the half-way house before his parole officer thought it was crazy he had a loving, supportive home he could be placed in but was staying in a half-way house. His P.O. quickly moved him in with his wife.

Tommy and Jennifer met while both were incarcerated. Tommy was serving a flat sentence [Editor: meaning, he had a release date, not a parole hearing] so his release was not dependent on a decision of the board.

Jennifer and Tommy married while in prison and when Jennifer went before the parole board, they acted offended that she dared get married to an inmate. They told her she would never be released as long as she was married to an ex-con. So Tommy and Jennifer made the decision to divorce so they could seek freedom. Tommy was released and later, so was Jennifer.  Jennifer’s Probation Officer did the same thing Brian’s did. Jennifer was moved from a half-way house to Tommy’s place, and they soon remarried.

Brian’s and Jennifer’s paper files turned into real people their parole officers had to make different decisions for. My answer could not mention a word of this. Those stories and more I’ve heard about over my incarceration have made me believe that my single status was the way to go. The very first reason why I never sought companionship was that I believed my singleness and the accompanying loneliness was part of my penance. So how to further answer the parole board’s question about my future love prospects?

The only analogous situations remotely close that I could pull an answer from are the many deep friendships I have had while behind these walls. Since they were still expecting a response, I attempted to convey that since those are my only points of reference, I would approach a romantic relationship as I do friendships, with an open and honest heart and a desire for true connection. I became an adult under the tutelage of my friends. I mentioned that my friendships have lasted years, many of them the length of my bit. Spending so much time together forges much more intimate bonds than most street friendships I am aware of. I have never had a friendship in here end badly. That was my answer. The response I got from a board member let me know that my response was not satisfactory. I was told, “But were any of them your spouse?”

Even though I was thrown a curveball question, the result of our date was not in suspense. I received a five year flop. Granted, my lack of an answer to a future relationship was not the reason I got the continuance, the nature of my crime was. However, my romantic future is clearly something the board is interested in. I have to ask myself, what can I do to resolve this concern for our next date?

Wayne Snitzky is an inmate at the Marion Correctional Institution in Marion, Ohio, where he is serving 15 years to life for a murder he was convicted of when he was just 18.