“So how’s Club Fed?” someone once asked me during a phone call home. For those who don’t know, the Federal Bureau of Prisons has a reputation of providing plush environments for convicted criminals to serve their debts to society, hence the play on Club Med. How could I explain to the person on the other end of that line how rough it really is in here? How could she understand the feeling of emptiness and sorrow in a prison with only a nine-hole golf course? The distress of having to live in a world where new balls for the squash courts are only handed out every six months. And every notion of country club-like atmosphere goes right out the window every week when I’m served my steak without even being asked how I want it cooked.

The real Bureau of Prisons which holds me captive keeps true to the school of thought that incarceration is to be a completely miserable existence. Rumor has it that up until the 90’s the B.O.P. was a great place to be a dependent of good ol’ Uncle Sam. But the 90’s are well behind us of course. That was the Clinton era. A decade of booming technology, budget surpluses, relative financial security and an administration which had a fairly easy time distinguishing its ass from its elbow. Ah, the 90’s.

My B.O.P. of the 00’s is a completely different monster than it was a decade ago. This is the Bush B.O.P., as in Mr. “Fry-em-first-and-ask-questions-later” Texas governor George W. Bush. I think it is important for the 99 out of every 100 (that’s the latest figure) Americans who aren’t in prison to keep in mind that it is Congress who pays a few dozen men with dubious high school credentials $65k a year to sling a food tray through my door 3 times a day and to make an at least half-hearted attempt to make sure no one kills me. This is the same Congress who approved the pitching of billions of dollars at major financial institutions like it was spitballs.

To give you a small example of how your tax dollars are working hard to maintain a respectable society (but not too hard), I want to cite a period not long ago when several weeks passed with no inmates getting their weekly issue of 1/2-ply toilet paper. When questioned about the absence of this basic hygienic staple, a representative of the institution said, with a completely straight face, “We ran out and there’s no money to buy more.”

In all fairness, that situation was eventually remedied and has not repeated itself again. The warden must have sold some toilet paper derivatives.

The penitentiary in question which has fed and clothed me for the past three years is a high-security establishment located among the lush corn fields of central Indiana. Terre Haute is the name of the city I list for my return address. Terre Haute, which ironically enough is French for “high ground,” is a lovely little meth factory of a town which is known mostly for its mediocre children’s museum, a more highly regarded engineering school, and for being host to the Indianapolis Colts training camp. Oh, and prisons. At last count there were three federal and two state facilities in this town alone. Not to mention a county jail tucked away somewhere among the trailer parks. My Terre Haute prison would kick any other Terre Haute prison’s ass. We’re bigger and tougher than all of them. And newer. Built on top of a decommissioned industrial waste dump in 2004, so far we’ve had surprisingly few instances of toxic drinking water and faulty drainage systems. OK, I’m only kidding about the industrial waste, but not about the water. Although I can’t say with any certainty that this place wasn’t built on radioactive refuse.

We’ve got about 1200 inmates here, including all the federal death row cases. Lots of gang members. Crips, Bloods and the million other gangs no one who’s from anywhere outside the south side of Chicago or uptown New York has ever heard of. Lots of white-only gangs too. D.W.B’s, A.B.’s, A.A.C.’s, W.A.R.’s, A.R.M.’s. If you’re not familiar with any of those acronyms, trust me when I say that the “A” in all of them does not stand for “African.”

I’m considering starting my own prison gang. A brotherhood based on loyalty and a dedication to striking fear in the hearts of heartless killers. The most important part of the gang start-up phase is picking a good name. A name which, when spoken, immediately makes the listener think to himself “Fuck, those guys are lunatics. I’m not messing with them.” Keeping this in mind, I named my gang the Super Friends.

My first attempts at recruiting for the S.F. were not terribly successful. One of the major deterrents to joining a prison gang is the fact that a “prospect” must stab someone before they become an official member. To get around this problematic initiation procedure and get my roster up, my first act as Super Friends shot-caller (prison lingo for a head guy) was to make the S.F. requirement not to stab a man but to tickle him. The few men I’ve told about my organization and its unique rite of passage all looked at me like they wanted to perform a traditional gang initiation on me, resulting in my decision to hold off on recruitment until I can fine-tune The Code and find some men who can handle the rigors and danger of becoming a Super Friend.

Gangs. What a load of crap. 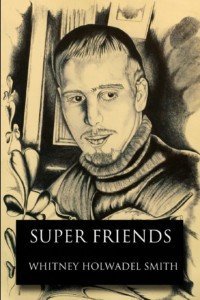 About the Author: In late 2008 twenty-four year old Cincinnati native Whitney Smith begins writing a blog he titles “Super Friends” from his solitary confinement cell at USP Terre Haute, where he is half-way through a 6 ½ year sentence for unarmed bank robbery. With no computer access, he mails handwritten entries to his father for posting. Before long he has hundreds, then thousands of readers from around the world. Writing about his past and present, Whit’s insightful account is scrubbed clean of self-pity and gives off an energetic ruefulness combined with a keen sense of humor. The blog entries reproduced here are interleaved for the first time with letters Whit and his father wrote to each other. This moving self-portrait provokes serious questions about the dysfunctional apparatus that is our federal prison system. As one early reviewer writes, “I am blown away by Whit’s writing; his voice is clear, so funny, yet heartbreaking – and I can’t stop reading.” Check out his book on Amazon!