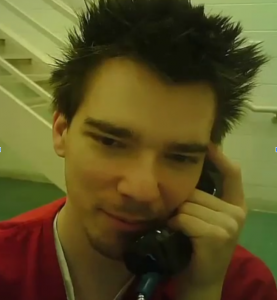 Growing up in the collapsing Soviet Union, I remember my parents trying their hardest to put food on the table. Our most common meal was potatoes with canned sardines. If we had a good week, we could even afford sour cream for the potatoes.

One memory I have is from when I was five. My parents brought home something special – rabbit flesh. I remember sitting there, looking at my plate and thinking of how much I liked rabbits. They were cute and cuddly and affectionate and carefree. And I knew I did not want to eat their corpse-flesh. I said as much.

I can now reflect that the wisdom of childhood, in all its righteous innocence, is a profound thing. I worried about what the rabbit would want. And then I expanded my thinking. What about the sardines? Heck, what about the carrots? Did they have feelings and desires too?

My mother did what most parents would do to calm their child – she told me sweet lies. She told me that like the carrot, the rabbit wanted me to eat it. That this is what it was “there for.” My father then poured me a big glass of milk and told me to chug it all so I would grow up big and strong, like a proper man.

For 26 years I believed these sweet lies. And I did grow up big and strong. But then I saw the documentary “Earthlings” and that changed everything.

I suddenly remembered my child-self and I grew angry at the lies that had been fed to me. I now know the truth, that while carrots may not have a central nervous system (hence no feelings), all animals do, just like we “manimals”.

That means that just like us they feel all the same things we do. That their lives are rich and vital. We do not have a special “divine right” over other beings, simply because we are human. While we may have needed to prey on animals in the past to survive, as a lion must, we have evolved and become civilized and it’s no longer necessary – just like we can now solve our interpersonal problems using civilized means rather than mortal combat. That’s why I am now a vegan in prison.

I admit, it was not smooth sailing. At first, because of a hierarchy inherent to my upbringing, I cut out mammals from my diet. No cows or their babies’ milk. No pigs, dogs, cats, rats, dolphins etc. – they are all “higher beings” I felt by virtue of their being mammals. Despite my raised awareness, I thought of fowl and fish as lesser-than. I wish I could say it was instantaneous, but my circle of compassion grew only slowly to encompass all living beings – all Earthlings.

Another childhood memory: my father took me with him to interview for a job at a slaughterhouse. Everything about that place felt wrong. It smelled evil and looked even worse. I burst into tears and begged him not to take the job. Though we needed the money, he was moved by my passion enough to turn down the position. I’d like to think that by convincing him, I spared his soul a horrific empathy-deadening experience. Killing, no matter what kind, erodes the soul.

How do I know? Because I killed someone. Under a delusion? Yes, but the outcome cares nothing for intent. To know that I ended the life of an innocent – it’s impossible to reconcile. The shattering, irrevocable horror of killing, knowing that my actions caused a black vortex of pain rippling out forever. If I had an aversion to unnecessary death before, it was multiplied a thousand-fold after the Tragedy. I searched for something – anything – to reduce the amount of harm my existence was causing to the wider world. I couldn’t reverse my actions the night of the Tragedy, and I’d been convinced by my soulmate that suicide would only cause another vortex of pain in the lives of my loved ones. So I did what I could to further minimize harm to living things. No longer would I consume any animal product.

Being in prison one has very little control, but one thing I could control was my diet. So I strived to find out how to become vegan in prison. Turns out the only way is through religious affiliation, and so I became a follower of the Jainist teachings (a Hindu-based philosophy of Doing Least Harm). Unlike many religions, the more radical a Jain becomes, the less violent they become. So it was with me.

For three years I ate the poor diet provided me by a grudging Department of Corrections. A diet consisting primarily of plain beans and dried peanut butter. For the first six months I suffered from Vitamin B12 deficiency, until I prevailed upon the nurses to do a blood test. Turns out their “nutritional experts” weren’t that expert after all. I now take vitamin supplements to compensate for my incomplete diet.

The outside world has many new and delicious vegan innovations but behind bars I am stuck with the bland diet of a monk (except for a snack package from Amazon that was only allowed due to the pandemic). I write this not to discourage others from living by their values but so that readers can understand how strangely difficult prison makes it to live a life that minimizes harm to living beings. You would think that prison would actually want to encourage veganism, given that empathy for all life is a quality that would help inmates with rehabilitation and reduce violence, both in the prison and outside of it. But as I experience every day, prison, through its institutional processes, seems to prevent many things that would improve rehabilitation rates for inmates.

Being in a cage myself, I have greater empathy for our animal cousins living under similar conditions. Being vegan is literally the least I can do, to mitigate suffering.

Combined with regular exercise, I am now more fit – bigger and stronger – than I ever was on a meat and dairy diet. DOC wants us to dress a certain way, live a certain way, and eat a certain way. It is a for-profit industry in which we are the commodities in cages. Living true to my ethical values has brought me a new meaning to life behind bars. No matter where I am, I will try to make a difference in whatever ways I can, to reduce suffering. That is why I’m a vegan, even behind bars.