An Underground Economy In Prison with Stamps As Currency

By stamp I mean our historical postage stamp. Regardless of drugs, contraband, violence, hustling food out of the kitchen, selling artwork — the stamp is the universal currency in prison (at least Texas).

The stamp has become the long lasting currency in the prison environment.  It has stood the test of time.

There’s not a prisoner that doesn’t seek to attain a stamp. After all, the stamp is the item that connects you to the world. The stamp (outside of a visit or illegal means) is the ONLY item that can connect you to the outside world. Everything you send out — be it a letter, drawing or writing — must be mailed through the mail room and postal system. There is no fax, text, email (again- if we’re speaking through legal means, which the majority of the prison population is regulated through). So, we are looking at thousands of prisoners buying thousands of stamps. While the stamp may lose its value (which we’ll get to momentarily) it never loses its existence. The stamp cannot be nullified. It has been vilified, though. Due to its multi-faceted enterprise, the stamp has been criticized and argued over.

The stamps are a commodity whose value rises or decreases depending on where it’s located and how it’s attained. It’s an item that is scrutinized and analyzed.

In the Texas Panel System there are 4 levels of custody and level:

If you are housed from G1-G3 you have the ability to hold a job within the prison. Each job comes with a hustle which means those with jobs have the greatest access to accumulate stamps (kitchen jobs being the most lucrative, because EVERYONE likes to eat special made food and quite simply extra food, whereas not every prisoner needs to buy bleach from a laundry worker or tape from a maintenance worker. Nevertheless each job will provide an abundance of stamps). 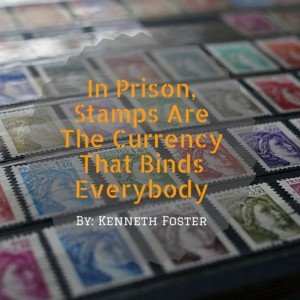 greatest deflation in General Population (G1-G3) because there is an overabundance of them. Prisoners- in possession of hundreds of stamps- lowered the price on them to trade out for other goods. For example, if you are going to commissary to buy 30 stamps (the most a prisoner can buy at one time) for $13.50 then I’ll give you 30 stamps earned (in the hustle) at .35₵ each- $10.50. A savings of $3.00. Who would pass that up?

(Note: because of this knowledge prison officials have tried to severely limit how many stamps prisoners can buy and possess. Just a few years ago, the amount a prisoner could purchase changed from 60 every 2 weeks to 30, and the amount a prisoner could possess went from 100 to 60. Those caught with more than 60 in their possession can face disciplinary action and will face confiscation of said stamps. Also, each stamp must have the prison # of the prisoner written on the back of EACH stamp. Because of that you either take the risk to scratch off someone else’s # and hold them, peel them and place them on envelopes or spend them quickly.

Eventually, stamps began to be passed off as 3 stamps valued at $1.00 . That became the status quo for stamps in General Population.

However, it’s not the same everywhere. For those on Medium Custody (G4) the stamp has GAINED in value. On Medium Custody you are not allowed to hold a job, therefore the buying of stamps comes exclusively from the commissary. Which means .45₵, but for those inmates who may indulge in gambling (Las Vegas has influenced the world) then a stamp is worth .50₵. Close Custody pretty much mirrors the Medium Custody tempo.

For those places in Administrative Segregation (where there is definitely no jobs and one is considered at the bottom of the barrel) stamps go penny for penny. Here the stamps get its full value.

Where the chaos begins is when a General Population worker crosses paths with prisoners housed as G4, G5 or Ad Seg. [Administration Segregation is a form of solitary.] After all, it’s going to be the General Population prisoners that hold the jobs, thus enters into each of these different worlds. Here’s where the problem occurs:

Let’s say one GP prisoner gives another GP prisoner a pan of cheeseburger. The pan consists of 50 cheeseburgers. 2 cheeseburgers go for $1.00. In GP that means 3 stamps, but on G4, G5 or Ad Seg that’s only 2 stamps. On GP terms that pan should gross 150 stamps (which is usually going to be split amongst 2-3 persons: the fixer, the deliverer, the seller).

But, entering into these other areas of the prison, that gross amount is going to drop from 150 to 100. While you would think “50 stamps make a difference on one’s lifestyle- the way cuts in pay or accepting less qualified jobs in society makes a difference on living standards. The drop from a Lexus to a Altima. No vacation to the ski lodge this year. No new iPhone until next year. The GP workers don’t want to go lower and the locked down offenders don’t want to go higher. Classical class conflict.

What usually ensues is a lot of haggling and/or bartering. Where walls are met (which occurs quite often when a point is trying to be made) the smart businessman will settle- “Hey, 4 burgers for 5 stamps”. Or for the buyer- “OK, here’s 6 stamps this time, but the next time you have spaghetti I get a BIG bag”. For those whose goal is usually the same- ie: Satisfaction (from either buying something or selling something), a deal is hatched and everyone is happy. But, sometimes, not without a hassle. In today’s world the price of happiness is something steep.

This is just one insight to some of the lifestyles going on in prison. Beyond the hype of drugs, rape and gang violence it’s often just men trying to enjoy something a little better than the crumbs we’re given. That is until the next inflation or recession. Again- prison mimicking our greater society and its problems, recession hits home for us too. I’ve moved to a new prison and over here the guys in GP are saying that stamps have dropped to a .25₵ face value. Now, even to that I have to say- “Aint that a bitch!” I fear that “Prison Spring” that could be in the making. God forbid!

Kenneth Foster is serving LIFE for Capital Murder in Texas.