The Day I Caught A Live Hawk – in Prison! 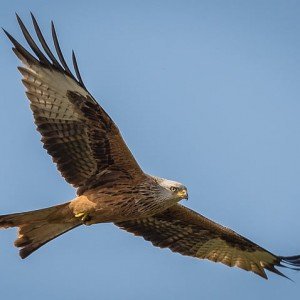 Like many others who find themselves locked in a cage with no way out, he too had a breaking point. The day we met, he reached it — and bloody murder became acceptable. Prison had changed him.

The sky was blue and cloudless that cold and frosty morning. It was a beautiful day to be alive and I was lucky enough to be the first one in line for outside recreation.

If you’re in Ad-seg [Administrative Segregation] on Ellis Unit, you have to submit to handcuffs to be escorted from our smaller inside living cage to our outside recreation cages. (Ad-seg prisoners are considered the most dangerous men in Texas prisons.) We have one of the larger chain-linked dog runs – cages built within a larger cage. Chain-links covers the tops of the cages and razor wire is used around the top to assure that we don’t climb up and cut our way out of the roof.

We are in separate cages, there are six in total, but the chain-link separating us is hardly a secure barrier when guys decide to attack each other, which they do. We call it unzipping the fence — when you break one of the chain-link wires and pull it out to leave a very nice opening to crawl through to another rec yard. Takes seconds.

Officer Carlton –young, white, chubby, and a nerdy type — was new on the job. He was escorting me to my recreation cage when we entered the larger area and I saw fresh blood everywhere along with a scattering of feathers and sparrow bodies.

Carlton chattered, “So Harris, you can have a cage with a hawk or without one.”

That explained the mess.  There was a live hawk trapped in one of the recreation cages. I looked at Carlton.

His little joke didn’t seem so funny any more.

“Come on Carlton, I won’t get hurt, and if I do, I’ll lie and say I got cut on the razor wire. You can write me a disciplinary to cover your ass. You promised.” Officers tend to try to keep their word, even if given jokingly. But none of us are beyond begging to get what we want — and I wanted that damn hawk.

“Shit! Hey Slim,” Carlton barked out. “Harris wants to go in the cage with the live hawk. Whatcha wanna do?” Carlton was surely supervisor material. He had passed the buck to his senior officer and covered his ass with impressive finesse.

Officer Slim was retired Army, 101st Air Cavalry, older, black, and he’d been a guard long enough to know a convict always keeps his word. “Hell, put ‘Bama in with the hawk. He’ll catch it for us. Damn country boy’s half crazy, but he won’t mention it if he gets hurt.”

It was my best guess that the hawk had entered through the gas port in search of an easy meal of sparrow and now he couldn’t find his way out. With the door to my rec cage now closed and locked behind me, I backed up to the food slot to have my handcuffs taken off. The hawk and I were now trapped together.

Carlton shook his head in disbelief, but he was learning the ropes. TDCJ [Texas Department of Criminal Justice] makes the rules, but guards and convicts have their own private code of conduct. And Carlton had to learn who to trust. “If you can catch him, I’ll take him out behind the gym and let him go,” Carlton told me. That was the nearest uncovered area and would require some extra effort on his part to walk there.

I had no idea of how I was going to get him to come down to where I could catch him. Throwing the basketball was not an option; it would damage his feathers and bones even if it didn’t kill him outright. My full attention was on this beautiful creature.  No telling what the wannabe Indians would pay for his feathers and claws. His head was regal as any Roman Emperor and his eyes – which turned on me – held the glint of madness in them, as the sparrows flittered and fluttered through the chain-link fencing as if they were teasing him into fury.

With a loud, startling screech, the hawk launched himself from his perch and flew the length of our cage prepared to commit more bloody murder. He went talons first, searching for flesh or freedom.

Instead, he found claws sharper than even his own tearing into him. He was hung up in the razor wire, and I had no way to get to him without getting hung up myself. I took off my quilted jacket in a hurry and prepared to try to free him, whatever the cost.

I shouldn’t have worried. With the bravery of his breed and a flap of strong wings, he managed to tear himself free, before rolling over in the air, and gliding to a safe landing beneath his earlier perch. I knew the hawk’s confusion wouldn’t last long, so I pounced cat-quick to wrap him in the soothing darkness of my jacket. I slipped one hand inside the coat to stroke his feathered breast and to feel such a magnificent creature. Though his heart was beating heavily, there was little blood on his wounded leg. He’d be fine.

By the time Carlton returned with another prisoner for recreation, I was ready to hand over my visitor.  As the cold seeped into my bones, I waited for Carlton to return with my jacket after releasing the hawk where his wings could carry him to a freedom I would probably never know again.

When Carlton handed me my jacket, I asked him, “Was he okay?”

“He was fine. Damn pretty bird. You should have seen him fly.” Our eyes locked and in that moment we shared an understanding deeper than either of us expected.  “I really thought you’d kill him when I put you in there.”

Yeah, that hawk was a killer. It was his nature. Being trapped with no way out had made him murderous. But it wasn’t his fault. I understood that.

Every time I see a hawk, I remember the day it was in my power to execute a murderer. I chose to forgive and pardon his crimes. It was a very good day.