The Catcher and The Receiver 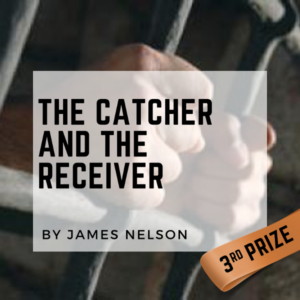 After my sentencing I was sent to a receiving unit here in Virginia. There they monitor you for a period of time to determine if you are crazy or stupid or, most importantly, a danger to them. The D.O.C only truly cares about their own. D.O.C stands for Department of Corrections. That’s for those who don’t know about the penal system.

Now, I will move through this story quickly so pay attention. After you are evaluated you’re sent to an “appropriate” prison to start serving your time. Well, a few weeks after I arrived at the receiving unit one of the most bizarre things that has ever happened to me, happened.

After I arrived I was taken to a desk. A man standing there asked me in a deep voice, “What size you is?”

“Large,” I said in a high pitched voice.

He disappeared behind some very large shelves. I remember being so scared. What have I gotten myself into, I thought. The man came back and gave me all that I would need: socks, under shorts, t-shirts, all state-issued. I was given a card with instructions on where to go.

When I first walk in the unit I notice how big it was. There were 3 tiers, nothing but cells; well over 400 . I could remember movies I’d use to watch about prison stories and mostly how they looked in the inside. It was surreal. As I was walking to my cell there were guys yelling at me, yelling “Yo, way you from!”

I am looking around and there are men everywhere. The 3 tiers had men hanging off the rails. It was like I was a celebrity; everyone wanted to know who I was. I arrived at my cell I still remember the number: A-111. I walk in. There were two beds a top and bottom I was assign the bottom, but someone was already in it. I look at my card to make sure it said “bottom;” It did. So I put my stuff on the top bunk. No big deal.

For the first 5 minutes the man sitting on the bed that I was assigned to said nothing he just looked at me. Then finally he ask me a question: “Where you come from?”

I had to process what he was asking. Was he asking me where I lived? Or was he asking me what country I was from or what? I didn’t know. This was my first time in prison. I don’t know all the slang they used in there. So I ask him what he meant.

He asks, “You come from another prison or the jail?”

“Why you in here foe?” I paused for a moment.

I remember a guy at the jail, Thomas, Who gave me some advice about being in prison. He said to me “Don’t ever ask a man how much time he has. And never ask him what he’s in for.” But here I am being asked.

“Murder.” I said. There was no reply, just another look and a head nod as though he approved.
Again, remembering all the prison movies I’ve watched. As long as you didn’t rape or molest any children you would fit in.

I went on to put my things up. The cell was so small I could not move freely without bumping into something. After I got myself together I was hot and sweat had soak my shirt. So I thohght, I need a shower. I grabbed my shower bag and headed to the showers.

My cell partner, the man who I now live with, stopped me and said “Don’t use tier 2 shower.”

I headed towards tier 1 showers since that’s the tier I was on, but they were full and there were people waiting in line for next. So I went back to my cell. My cell partner said to me. “That was fast.”

“There’s too many people waiting. I’ll go later.” I said.

“You can use the 3rd tier shower if you want. Not a lot of people up there,” he said.

It didn’t look if anything was wrong with it. But it didn’t matter, I was told not to use it. I continued to the 3rd tier shower. There were only two showering so I got in and took a much needed shower. Nothing happened there, so that was good. I went back to my cell. And for the next two weeks I showed on tier 1 and 3.

While I started serving my bid. (Prison term.) I continue to watch tier 2 shower, but I only saw a few people go in and out. What was going on with that shower? I thought to myself.

Saturday. I had finally gotten outside to workout. I went back in to take a shower, grabbed my shower bag and headed to the shower. But this time both shower were full except for tier 2 shower. I was hot and sweaty. All I wanted was to take a shower. I couldn’t wait. I looked up to tier 2, there were two people standing outside the shower. I know what my cell partner told me, but I needed a shower. I couldn’t wait any longer. So I went to tier 2 shower. The 2 people were still standing there. They looked at me as I walk pass them. I then made the turn into the shower. As I walked in I notice something different from the other 2 showers instantly. It was much cleaner. The sinks were untouched. The floors look as if no one had ever walked on them. The tiles on the shower wall, you could see yourself in them. ‘What the hell is going?”I said out loud. Maybe I shouldn’t be in here. I thought to myself. The other showers were in really bad shape, but not the shower on tier 2. It was…..Perfect. But the hell with all that, it’s just a shower and I am about to get wet. So I took my clothes off an got in the shower. I looked around and I was alone. “O.K, enough of this.” I said. I hit the button on the wall. The water began to come out Hitting my body all over. “This feel amazing.” I said out loud. I started putting soap on like I always do; I have soap all over me now. I open my shampoo to put some in my hair.

As I started to rub my head I heard a deep voice say. “Hey, man who you talk to?” I was facing the wall so I saw no one come in. I turned around and there were the 2 men who were standing outside the shower when I came in. There’s one right in front of me. The other one was by the shower door. “Who you talk to?” he asks again. ”

What do you mean?” I said nervously.

“Look, everybody know what time it is with this shower. And you been in this unit 2 weeks so cut it out. You thought you could come up here and get a quick shower and gone ’bout your day. It don’t work that way. Now if you didn’t talk to anyone before you came in here this is what’s up”.
“I didn’t.”I said cowardly.

The guy in front of me says to the other one at the shower door. “Call Lil Kim in here.” The man at shower door went out and just as quickly returned. Behind him was a short man. He had a robe on. His face looked like a female’s face. His eye brows were skinny over his eyes. His eyes were green and his lips were shinny. Lil Kim stopped next to the man in front of me. Now understand I standing here naked. The three men here are looking at me. Not to mention I am now scared as hell.

The man in front me says. “This is what’s up. This is my bitch right here. And this is my shower. If you come in here, two things you gonna do. Get fucked or fuck someone else. Now, which one you gonna do?”

“Your cell partner told you not to use this shower. You remember?” I did remember, but I would continue to play dumb.

“I don’t remember him saying anything.” I lied.

The man at the door pulled out a knife. At that time I knew I was in danger. The man in front of me tells Lil Kim to take the robe off and then took his clothes off. He told Lil Kim to get in the shower.

At that time another man came in. When he saw what was going on he asked, “What you want me to do?”

The man in front of me tells him to “Not let anyone in.”

Now I am sorry but I can’t finish this story. It gets very explicit and very sexual from here. But still to the point. Prison is a very dangerous place. And if you are new in an environment like this, you must listen when someone tell you or gives you advice. I was warned not to use Tier 2 shower, but I used it anyway. And for that I learned a valuable lesson.

This is a true story.