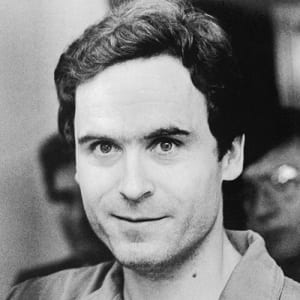 The day I met Ted Bundy I was sitting in the reception area for new prison arrivals at the “Reception and Medical Center” (RMC) at Lake Butler, in North Florida. I’d recently been convicted of murder after a jury trial in Tampa, received a life sentence, and endured a rough four-hour ride in a sheriff’s transport van with eight or nine other hapless souls sentenced to prison. About half of the sixty or so chairs lined up in rows were filled with prisoners from other counties waiting to be called. Our group from Tampa sat together, as did the others.

One of my fellow felons said, ”Hey, look. Ted Bundy.”

I turned in my wooden folding chair. Two Columbia County deputies on each side of Ted Bundy, hands cuffed behind his back, were leading him into the reception area. A prison guard with a ring of large brass keys pointed them toward one of two tiny holding cells in the far wall, opened the barred cell door, and locked Ted in. One deputy gave a file folder of paperwork to the guard, the other retrieved his handcuffs, and they were gone. The guard left, too.

Ted stood at the holding cell door, looking out at us. He still wore the suit and tie he’d worn at his death penalty sentencing hearing. I’d seen it on TV.

I was still wearing my court suit, too. They would take our ”street clothes” in exchange for a set of ”prison blues” later, and issue us prison numbers in place of our names. I casually strolled over to the holding cell. I looked closely at him. We looked a lot alike, similar heights, hair and sizes. We could have been a couple of lawyers, not convicted murderers. But we were different — Bundy was a serial killer. And the day before, he’d been sentenced to death. Bundy spoke first.

“I don’t smoke. It could kill you,” I said, always the smart ass.

“I’ll see if I can get you one.” I strolled back over to where everyone was sitting, and asked my friend Darryl Lopez for one of his Marlboros and a match. Darryl was an assassin, having pulled a Lee Harvey Oswald on a guy named Miguel Muñoz, shooting him with a high-powered rifle at long range after Miguel had placed a bomb under Darryl’s uncle’s Lincoln. Typical Tampa Mafia revenge. He had the same sentence, life, that I had.

“Thanks,” Ted said, when I returned with the cigarette. He lit up, inhaled hard, held it, then blew out a cloud of smoke.

I knew all about Ted Bundy. If you watched TV news between 1978 and 1980, you couldn’t help but know all about the man, a handsome sociopath who’d charmed then slaughtered dozens of young women in several states out West, before coming to Florida and brutally murdering two sorority sisters early one Sunday at Florida State University in Tallahassee.

And he was being sent to death row not for the murders of the two college coeds but for the death of Kimberley Leach, his last victim: a twelve-year old Lake City girl who’d disappeared while waiting for a school bus.

In Florida, during that period, the only means of execution was electrocution by ”Old Sparky,” the  name bestowed on the electric chair. There were a lot of people, guards and private citizens alike, who would have given anything to be the executioner, to have pulled the switch on Ted Bundy.

Something had been nagging at me. I had a question, and didn’t care if it offended him. I’m not impressed with celebrity, and had been in cells with more than one serial killer during the almost two years I’d languished in the dungeon-like Hillsborough County Jail.

“Will you answer one question for me?” I asked.

His eyes flared at me for a moment. Perhaps I glimpsed the rage carefully hidden beneath his calm façade. He took another hard hit on the cigarette and exhaled a cloud of smoke, gathering himself.

”I had nothing to do with that girl, but I was a convenient scapegoat. If you know anything about me, you know I’m not interested in twelve-year old girls. Whoever killed her is still out there.”

Two guards approached, one unlocked the cell door, and they took Ted back to be processed. One guard told me to take a seat. I sat down next to Darryl. I looked at my watch. Forty-five minutes later, chained up, now wearing prison blues, Ted Bundy left RMC accompanied by two guards, headed for Death Row at Florida State Prison (FSP).

That was the last I saw of Ted Bundy. Was he telling the truth about another child killer on the loose? I don’t know. He seemed very convincing, but he was acknowledged as a master liar. Highway 90, where Kimberley Leach waited that day, her fate sealed, runs through a rural county, an unusual place for an out-of-state serial killer to happen upon a young victim. Ted Bundy was convicted of her murder, and he paid the ultimate penalty.

Ted Bundy, like all Death Row prisoners, was allowed visitors in the Death Row visiting park from 9 a.m. until 3 p.m., Saturdays and Sundays. Ted married a woman who visited him, got her pregnant, and became the loving father of a daughter, baby Rose.

Let me tell you how I came to know this.

In 1958, my family moved from Texas to Florida, east of Tampa. An orange grove separated our house from another family, the Ferrys, Bill and Liz, and their three children, a boy and two girls.

My two younger brothers, Dan and Tom, and I played with the Ferry children in the orange grove and adjacent woods. I was nine years old. Billy Ferry was six, in the first grade, and his sisters younger. My mother became best friends with Billy’s mother, Liz.

Bill Ferry, 6-year old Billy’s father, was an incredibly strong, brutal man who insanely whipped his children with a heavy leather belt for any insignificant infraction, in their front yard, in full view of neighbors and passing cars. My brothers, Laddie the collie, and I crawled beneath an orange tree and watched the brutality the first time, but that was enough. When we heard the girls screaming we would run away. Their mother would stand in the front doorway and watch her children being beaten, but say nothing. We figured she was terrified that Bill might turn his belt and fists on her if she tried to intervene. I hated it, and hated him.

Billy never screamed when he was beaten. It might have been better if he had. It seemed that Bill whipped him harder and longer to make him beg to stop. I don’t know how he endured it. I knew I couldn’t. Billy remained mute, somehow, collapsing on the ground and lying there while Bill took his turn with the girls. We wouldn’t see the children for a few days after the worst beatings, surmising they needed to heal up.

Time went by. Billy grew more and more withdrawn, then we heard he was living as a recluse in the woods. As a very mentally-disturbed young man, dirty, unwashed, when he came out of the woods, he was a bully magnet. Usually he ignored the insults, but one day he snapped.

Checking out a bag of groceries at the Winn Dixie supermarket, Billy silently endured jeers and jibes from a couple of teenaged bag boys. He took a five-gallon bucket to a nearby gas station, filled it, returned to the grocery store, flung gasoline on the innocent people in the checkout line, and ignited it. Five people burned to death.

After trips back and forth to the state mental hospital, Billy Ferry was sentenced to death for the five murders, and sent to Florida’s Death Row.

Billy’s mother was determined to visit her insane son on Death Row. He was heavily-medicated with psychotropic drugs, and she didn’t know what to expect. My mother had been visiting me at Union C. I., with the rest of my family, and explained the procedures.

When Liz returned from visiting Billy, she told my mother all about it.  My mother told me.

Most all waiting lines of prison visitors share commonalities. The majority of visitors are women: wives, mothers, sisters, girlfriends, grandmothers, aunts, children. There are men, of course, in the minority. Visitors often are forced to stand in line for hours before admittance. Some of the regulars never miss a weekend, and establish friendships with other visitors that continue for years.

Before they married, Bundy’s girlfriend was a topic of speculation and gossip among the other visitors. How did they meet? Why did she visit a notorious serial killer/rapist? Did she love him, or did she pursue some ulterior motive? Rumor was that she wanted to write a book about Ted, cash in on his notoriety. Wasn’t she afraid? Did Ted love her? Was a psychopathic serial killer capable of love? How could she get pregnant in a Death Row visiting area supervised by prison guards?

In those days, prisoners with life or death sentences were not allowed to marry, except to legitimize a child’s birth. Florida is not a conjugal visit state, where married couples are permitted to spend private time together.

(Tex Watson, a member of Charles Manson’s murderous cult serving life in California prisons, fathered three children with his wife during conjugal visits, creating an uproar when it was discovered that his family subsisted on taxpayer funding: public housing, welfare and food stamps. His wife was a full-time mom who visited Tex Watson on weekends, enjoying their conjugal visits.)

In Florida, prison rules permit only a ”brief embrace and kiss” at the beginning and end of visits, which would seem to preclude pregnancies and subsequent marriages.

Even on Death Row, couples have always found ways to have sex. Think about it — what does a  condemned murderer have to lose?  He slips into a restroom with his visitor for awhile, emerges, and another couple takes their place. You are a prison guard who happens to look the other way. You see nothing. What is your alternative? Terminate the visit? Send the prisoner back to his cell?

No. Interference could possibly infuriate a murderer who could attack and kill you, in return. Best to leave them alone.

Liz Ferry reported that Ted Bundy was charming, friendly and courteous to the other visitors. He was also financially well-off with plenty of money to bribe low-paid guards to do his bidding.

It is a curious phenomenon that many condemned men attract citizens who send them money. An elderly Christian lady sent the cannibal, Jeffrey Dahmer, $25,000. God told her to do it. Charles Manson died a millionaire. Murderer, John Wayne Gacy, profited from sales of his bizarre clown paintings, which are still sold on the Internet.

When Bundy’s wife became obviously pregnant, visitors speculated, is the baby Ted’s? They’d all seen the couple take their turns in the restroom. When she was born, and her mother began bringing her to visit, there was little doubt baby Rose’s father was Ted Bundy. ”She has Ted’s eyes,” Liz Ferry told my mother. ”He loves that baby.”

But where is his daughter today? Does anyone know?

Charles Norman has been serving LIFE for 1st degree murder in Florida since 1979.