How To Make Tattoo Equipment In Prison

So where do prisoners get their tattoo equipment in prison? I assure you that no American prison sells tattoo guns, needles, or ink, nor do they officially sanction the art of tattooing. Gun in hand, a prison-rebel on his hustle earns money, respect, and props from others. Their artistry is from a combination of patience, technique, experience, and skill, while the means and machines are easily MacGyver’d together.

DON’T MISS our story about a prison tattoo artist

There is a reason most prison tattoos are in black and white and shades of gray: most prison tattoo ink is homemade, and it’s made from soot. Less common are “obtained” inks: made from the acrylic paint available for purchase in most prisons for art purposes. If allowed to sit for a while, the acrylic binder separates from the pure pigment and then the binder is “wicked” off, or absorbed, with a piece of toilet paper. There’s a third option — real tattoo ink — which is smuggled into prison by the correctional staff. I’ve never seen real tattoo ink, only heard about it.

Good homemade black ink is made from soot, or what is known in the art-world as “lamp black,” along with water and some kind of liquid binder. The binder is needed because soot and water mix like oil and water unless something binds them together. Some artists mix soot and water with toothpaste or hand lotion, but the most common recipe, and the one I used when I was a tattoo artist, is as follows:

So, how is the soot made? First, we twist toilet paper very tightly and roll it in oil or grease — this can be Vaseline, which is sold at commissary or cooking oil pilfered from the prison kitchen. Then we light the twisted toilet paper on fire and hold it – like a “candle” — under any kind of smooth metal surface we can find – this can be our beds or the inside of a locker. After a while, the tip of the flame deposits pure black soot, or “lamp black,” onto the bottom of the metal surface.

Once enough soot is deposited, you simply need to scrape the soot off and collect it on a piece of paper, preferably a glossy magazine, to keep it from sticking. After that, you take this soot, mix it with your liquid/binder, and then you’ll have permanent black ink, perfect for tattooing. To make shades of gray, you simply dilute the black with water. But there is an art to diluting black soot, using just the right amount.

Now you have permanent black ink. But how do you get it on the skin?

You need a thin needle, to minimize damage to the skin, and one that is VERY sharp. Amateurs often try to use sewing needles — sold in kits at the commissary — but they’re usually too thick, causing unnecessary trauma to the skin.

Most prison tattoo needles are made from either one of two sources. The most common is the thin spring found in many retractable “click” pens. The spring is removed from the pen, painstakingly straightened, cut to length, and sharpened. Thefavored, but less accessible method of tattooing in prison, is done by using a guitar “G” metal string, which can only be found in prisons with music programs and instruments. If you find one, you remove the metal, which is then straightened, cut to length, and sharpened.

How do you sharpen a tattoo needle? Believe it or not, you do it with electrolysis. You fill a cup or a pill-bottle with water and salt. The needle then is connected to the positive end of an electrical source (a battery or an AC/DC adaptor) with a piece of wire. Another wire is then connected to the negative end of the battery and placed in the saltwater. When the positively charged needle is dipped into the saltwater, the end quickly turns black and is wiped clean. If this process is done over and over again, a thin layer of metal is finally wiped away — and every little bit makes the needle that much sharper. 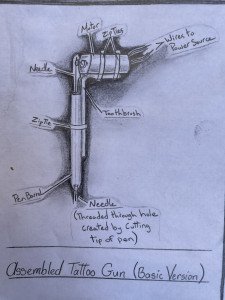 So, now I’ve described the prison ink and super-sharp tattoo needle. But unless you want to spend hours and hours or days and days poking a pinprick of the design in at a time and still not having it look as good as it could, you’re going to need a motorized tattoo device called (much to the chagrin of some free-world tattoo artists) a tattoo gun. At its core, a prison tattoo gun has three main components: the motor, a “barrel”, and a mount. The barrel, usually made from a pen barrel, holds and focuses the soon-to-be attached needle. The mount, usually made from a prison toothbrush, holds the barrel underneath the motor. And the motor drives the tattoo needle up-and-down at lightning-fast speeds.

Pens and toothbrushes are sold at nearly every prison’s commissary. They are so inexpensive and easy to get that they’re considered disposable, even in the tight economics of prison. But what about the motor?

It has to be small enough to fit easily on our tattoo gun. Surprisingly, small motors can be found through many, many sources, even in prison. I can only speak about Michigan specifically from experience, but we were once allowed to purchase personal tape-players/radios, and the motor that drove the tape-player was perfect for a tattoo gun. The prison system also allows us to buy our own personal beard-trimmers so that the state doesn’t have to provide the means for us to shave or care for facial hair. And the motors from these are the most commonly used for tattoo guns today. 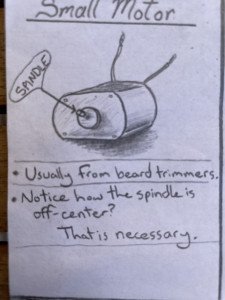 Other sources include the small motors in typewriters (which is what legal documents are generally typed on in prison), and the motors from small personal fans. I have even seen a handmade motor, created by a cellblock “fix-it” man, who carefully wrapped copper wire from the electrical cord of a television into two electromagnetic coils. Whatever the source, it isn’t particularly hard to come across a proper-sized motor in prison. Depending on the motor, it may already have a spindle, an off-center piece on the moving wheel of the motor that, when spun, rotates whatever is attached (you may have to make one by gluing or soldering a small piece of paper clip just off the center of the rotating part of the motor).

Now you have the motor, the mount, and the pen barrel… you’ve already made your ink and your needle. You have everything you need to be a burgeoning prison tattoo-artist, but you need to assemble it into a workable device. Now what?

Once you’ve gathered all your supplies, you remove the ink-tube from the pen, leaving behind just the ball-tip writing-end of the pen. With nail-clippers, you cut the “ball” off the ball-tip, leaving a small hole the size of your needle. You then cut the barrel with scissors, nail clippers, or a piece of floss used like a saw (the barrel should be a bit longer than the length of the needle). After that, you attach the barrel to the mount (if using a toothbrush, you often have to melt the plucked brush head to a 90-degree angle), securing it with rubber bands or the zip-ties passed out to secure prison laundry-bags. You then attach the motor on top of the mount, securing it in the same way.

Now you thread the needle through the hole of the barrel and wrap the other end around the spindle. This acts much like the pistons in a car engine; as the motor spins, the end of the needle rotates but is focused by the barrel into a primarily up-and-down movement with every spin. This is the basis of the tattoo gun. With the needle dipped in ink, the needle now moves up-and-down into the skin many, many times per second, driving ink into the skin. Artists then slowly move the device as the needle penetrates the skin, and a line is inked forever into the skin of the person receiving the tattoo. Important issues include how deep to penetrate the needle, as well as which techniques to use to achieve certain shadings and components of the tattoo.

Prison tattoos get a bad rap because of hygiene – we are essentially tattooing in our homes with a toilet mere feet away. Scurvy tattoo guys also reuse needles or ink in an attempt to pinch pennies (truthfully, more often than not, this is done out of pure laziness). But, trust me, I made fresh ink and a fresh tattoo needle for every tattoo I ever did.

Prison tattoos, no matter what they represent, are an important part of prison culture. The art of tattooing is a pillar of the underground economy, and an understanding of prison tattoos is an important part of surviving prison. Today, I focus my artistic endeavors in other directions, both for personal growth and to stay out of (further) trouble. But I still love the art and look forward to the day when I can create them in the open. Until then, I merely read the messages in others’ ink and wear my own with pride. Tattoos identify affiliation, heritage, beliefs, and often send a message of who you are and who you want to be. Few people leave prison without one.

Prison tattoo culture developed primarily with street/’hood tattoo culture. Old heads [inmates who’ve been in prison for 40, 50, and 60 years] talk about and exhibit some primitive, faded tattoos. Lighter-skinned men’s tattoos often turn to a bluish color over time. These are usually done in the “American Traditional” style common with military men, especially sailors. These usually comprise of very-stylized, single-image outlines, sometimes with rough shading. But the theme of these images, as opposed to the ones sported by those folks who were tatted outside prison, were more often related to their crimes (the outline of a body, a smoking joint, marijuana leaves, a syringe), symbols of being a rebel (such as “Viva Zapata” on Latinos, Confederate flags on whites, the Black Panther “fist” on Blacks), death, guns, and women (and, very commonly, women with guns).

Over time, as general tattooing started to develop in artistry and the domination of gangs and general street culture increased amongst inmates, prison tattoos evolved. They became more technical, more detailed, and developed a certain symbology and focus on certain themes.

Prison tattoos today are less identified with the inferior quality of past jailbirds, and more by the styles and specific symbols of their designs.

Prison tattoos, whatever they represent, are an important part of prison culture. The art of tattooing is a pillar of the underground economy, and an understanding of prison tattoos an important part of surviving prison. Done in secret, with breaks to hide from the staff, they are then displayed proudly by those with them. The identifying affiliation, heritage, beliefs, and often sending a message of who you are and want to be. Few leave prison without one. I’ve been under the needle and proudly wielded the gun. Today I focus my artistic endeavors in other directions, both for personal growth and to stay out of (further) trouble. But I still love the art and look forward to the day when I can do them in the open. Until then, I merely read the messages in others’ ink and wear my own with pride.