It was a hot June afternoon at Lawrenceville Correctional Center in Lawrenceville, Virginia. Everybody was going to the yard for recreation. It was around 2:30 p.m.

Now at Lawrenceville there are six different buildings that house inmates and each building has three pods. So when they call recreation you can go from one pod to another pod without getting caught. Plus there are no cameras to see what is going on. 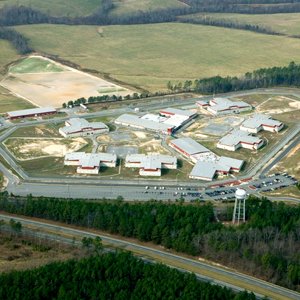 On this day during the exit of all inmates leaving 30 building pods, two guys went from 31 pod to 33 pod with the intentions to rob someone upstairs in cell 319, but one of his homies came upstairs and was telling the two robbers they ain’t going to mess with him or they got to mess with every Blood

[gang member] in the pod. The two robbers agreed to leave it be and went downstairs to two gay guys who shared a cell and was planning to rob them.

Before I go any farther let me tell you about these gay guys. The gay guy on the bottom bunk is a maintenance worker at the prison and the gay guy on the top bunk is an ex-army ranger who acts really feminine. Now they’re both asleep with the cell door locked.

At Lawrenceville prison, anybody can go to any cell door and yell to the booth’s officer to be let inside and the door will be opened [by a corrections officer sitting in a booth]. The two robbers did just that, and the officer didn’t notice they were going into the wrong pod. She just opened the door for them.

When the cell door opened to cell 305, both the gay inmates woke up and looked toward the door. As the two robbers entered the cell, the ex-Army Ranger jumped out of bed and started to fight both of them while his cellmate quietly watched from the comfort of his bed. The ex-Army Ranger was getting the best of the two men who came to take anything worth value on the prison yard (such as TVs, CD players, CDs, commissary, clothes, shoes, drugs, jewelry) and anything else they possessed. But one of the robbers was about to do something that I know he regrets to this day.

Being that the two robbers were getting beat up, one of them pulled out a prison shank that was about 12 inches long – from the bottom of the handle to the tip of the blade. It was a buffer brace. You know the buffers they use to shine the floors with. Well it has a long strip of chrome metal as a brace on the shaft of the handle. That was broken off and made into a knife.

The smaller robber started swinging the prison-made shank towards the former Army Ranger, trying to get him to back off, but the ranger just kept coming at him. So when the ranger came to swing a left-handed punch, the robber stabbed the ranger in his left side above the rib cage, near the armpit area. He pierced his heart an 1/8 of an inch, and the ranger fell back on the bed, bleeding all over the place.

He was dead and everybody in the room knew it. The robbers took what they could and left. They caught the pod door opening and took off through it, trying to get back to their pod across the hall.

The cellmate of the dead Army Ranger comes out of his pod screaming, covered in his celly’s blood, and throws a hot pot at the booth window, where the officer sits above the pod. When he gets the officer’s attention, he yells that they killed “Dee-Dee” and the officer is in shock at all the blood on the inmate. She grabs the walkie-talkie and starts screaming into it, calling for all available officers to report to 30 building ASAP. Every officer comes in and is shocked by the scene. There’s blood everywhere.

The robbers were both white and black, so officers locked up every white guy that was baldheaded with tattoos and, within an hour, they had two robbers identified. (On the way out of the pod with the dead ranger, medical staff dropped the man off the stretcher, by flying down the sidewalk trying to turn a corner, and the dead inmate rolled right off the side.)

The ex-Army Ranger only had two years left to serve. And the robbers received life sentences. They both were going home within five years. They ruined their lives because they wanted to steal some food, TV and CD players. That was all they got out of the cell.

The entire prison remained on lockdown for two weeks. This is a true story, a story of prisoners killing other prisoners, witnessed by me, Sidney Martin.

Sidney Martin is serving time for grand larceny and theft for a spree of automobile thefts in Virginia.

We send comments to our writers on a weekly basis, but if you’d like to contact this author directly, please write to: