Simple communication could prevent so much trouble in prison. 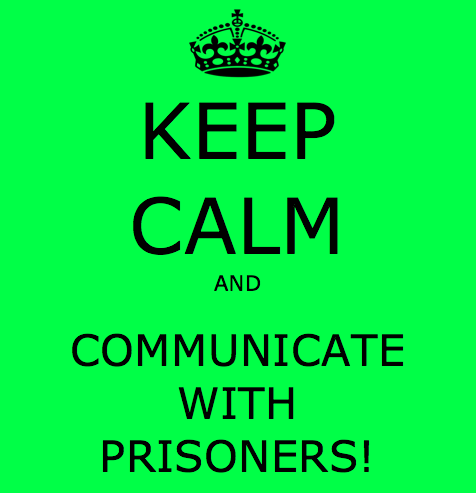 It is my experience that guards do not communicate with inmates effectively or at all. Guards seem to have a mindset that information is a privileged precious commodity and inmates aren’t allowed access. Most cases of inmate insubordination, anger and the use of the grievance system could be avoided with a simple exchange of information between guards and inmates.

On this unit, the water has been turned off twice with no warning to inmates. We wake in the early morning and use our cell commode and can’t flush. No water for brushing teeth or shaving. No drinking water. No Warning.

Simple communication by the guard coming to each section warning of the water shut off and allowing inmates to stock up water could have prevented any issues. This would have also kept anger, accusations and repeated annoying questions to a minimum. But the whole guard force decided there was no need to communicate the upcoming disruption to inmates.

Recently, our water in the showers went totally cold for two weeks. That meant 144 men taking cold showers in winter. The outrage was severe. We put in 160 requests for information. We spoke to the building officers. No guard could, or would, tell inmates why we were taking cold showers.

Inmates assumed we were being punished for some unknown reason. The anger was boiling though the water was not.

After two weeks, a maintenance inmate worker finally told us a boiler heater was broken. The part was on order. No guard thought it was worth it to let inmates know there was a boiler problem – and that [the water cutoff] wasn’t retaliation. This issue was not a security risk. Another inmate, not a guard, had defused a dangerous situation when no guard felt there was any need for simple communication. In the meantime, the grievance process had been initiated. Phone calls had been made to families and guards were harassed after simple communication could have prevented 144 inmates from extra stress.

Here’s another example. A guard comes to our pad and says they are racking us up [keeping inmates in their cells with loss of privileges, aka a “lockdown”].  No explanation given. Requests to the guard for a cause are ignored. Regulations say a sergeant or above has to be the officer doing rack up. Questions of who authorized rack up are answered as “a higher up.”

We inmates refuse to comply so the guards call a riot on our pad. The guards come 13 deep with gas gun and masks. Now again 144 inmates are seriously angry. Now we’re racked up for 72 hours. Tempers are really flaring – all because a guard would not simply say the count can’t clear, so we are doing a roster count and then we’ll turn you back out immediately.

A simple exchange of information by a guard could have prevented all of this: 72 hours of lockdown, the kitchen making 3 sack meals per day for 144 inmates, officers having to do all work on the pad for 3 days and grievances flooding the office.

Or, consider this. It is our day for commissary, but inmates are sent back from commissary and told the store is closed – with the guard saying only that “no one is going.”

Again, 144 inmates are super angry. We are already limited to when we are allowed to go to store. Now we’re being denied. Turns out the reason was the computer system had gone down so there was a two-hour period of no store.

But the guard never told anyone why we were being denied store. So once again, the inmates suspected retaliation. And that turned into 72 hours of no store because of inmates’ angry reactions. A simple exchange of information could have prevented all of this.

All kinds of trouble results because guards believe inmates have no right to privileged “guard only” information. The guards wrongly believe there is no need or reason to inform inmates of anything, especially something concerning them.

Communication is a missing vital link.

Anthony Kenley is serving 60-years for aggravated sexual assault of a child.