Kentucky’s Prison Riot: Was Medical Neglect The Cause?

A reality of walking through the gates of prison is there’s a possibility you may never leave. Anyone entering those gates has to be careful; you don’t want to pick up something you didn’t come with. This warning relates to the abundance of contractible diseases – HIV, hepatitis, TB – but what no one tells is that there are far worse things that could happen to you.

An inmate and Iraq veteran named “Captain” would fall victim to the lack of order and confusion that is prison. The effect of his death would cause a literal spark amongst the prison population.

Captain began as the stereotypical man entering prison. Clinging to PTSD, he blamed his wife for cheating on him while he was overseas, and his victim for being stupid enough to be caught in the act with said wife. In time he came to realize that his actions were his own. The situation should have been handled differently.

During his 10-year sentence for the violent outburst that left his victim hospitalized, he became the commander of the Veterans Club. He was not only well-liked, he was respected. Captain became a peer to countless young, disgruntled men finding themselves incarcerated. These men, though captives of their own decisions, don’t respect their captors, by the very nature of their circumstances. So when forced to watch the rapid physical decline of someone they consider their own, that lack of respect becomes more pronounced.

Captain came down with a cold. He complained of dizziness, fatigue and a slight fever. Despite his ailment, he still did his best to be there for the members on his prison league basketball team. He was, after all, only 33-years old and a cold never stopped him before. He collapsed during the first quarter. Now his life was in the hands of the prison’s medical department.

A staff of five nurses is insufficient to handle the healthcare of 1200 inmates. The nurses often find themselves stalked by inmates deprived of intimacy, and hassled by the guards who gravitate to them in hopes of a date. Throw in the limitations placed upon healthcare staff who often find their hands tied by Corrections administration’s strict adherence to procedure, and it’s easy to see how mistakes are made, short-cuts are taken, and little medical problems become escalated when they’re overlooked or misdiagnosed. Inmates, however, only end up seeing the aftermath of what can amount to fatal ineptitude.

Captain would meet “Grumpy” in the prison medical’s waiting room. Grumpy was not well-liked. He was obnoxiously vocal and would tell anyone listening that the nurses were out to kill him.

His demands for treatment were prompted by an illness the nurse practitioner couldn’t diagnose. Medical staff acknowledged that a “condition” existed – nevertheless, unless or until the cause was confirmed to be life-threatening, treatment would not be provided.

It had been close to a year and Grumpy had gone beyond being seen as a nuisance to the guards and the healthcare staff he urgently asked for treatment. But that didn’t stop him from showing up daily. His constant presence seemed to exacerbate the evident hostilities shown by everyone present. Captain, by proxy, found himself sympathetic to the man’s plight, and so the tinder was laid in what could only become a volatile social condition.

By the time Grumpy was finally diagnosed, his suspicions had become confirmed truths in the eyes of the prison population. He died a week later.

Captain noticed that the inmates from supportive families got the treatment they needed, once their loved ones called the prison administration with inquiries as to why things weren’t being done. He’d burned those bridges and now regretted it.

Captain continued to ride the pill call line standing outside, in the cold, waiting for up to an hour. He went to his scheduled medical appointments only to be told that he was sick and should continue his pill call regime 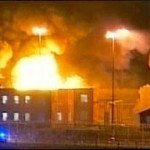 n and drink plenty of fluids. When his symptoms worsened, and he developed shortness of breath, he was allowed to receive breathing treatments. This one concession on medical’s part would prove to be their undoing. 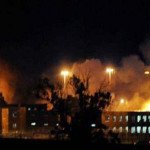 The breathing treatments served as a placebo, the teaspoon of sugar that made the bitter medicine being administered easier to swallow. Though Captain still exhibited the same ills, the treatments were a weight-lifted, because he could breathe again.

He spent his last moments alive fighting for breath, his lips tinged a shade of cerulean blue, in desperate need of oxygen. The nurses on staff were busy, and protocol dictated that pill call, sick call and scheduled appointments be completed prior to any other inmate concerns.

In the waiting room, just five feet from the nearest nurse, Captain died of complications from pneumonia, drowned by a lungful of his own fluids. With the tinder laid and the atmosphere ripe for combustion, the spark caught flame. The abrupt outpouring of grief consumed everyone. 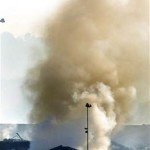 “Yard dogs” – prison guards whose sole job is to maintain crowd control amongst the inmate population – found themselves trying to outrun the blaze of destructive wrath that was the culmination of nearly 1200 inmates’ resentment.

The spark, and the resulting fire, became an inferno – and the first building to go up in flames was the prison medical.

It was worse than leaving with something you didn’t come in with. Captain lost his life, Grumpy died in misery, and the prison riot that ensued when the prison system’s inadequate healthcare was overlooked and left untreated, metastasized like a backdraft, engulfing the entire compound into their funeral pyre.

For now, the disorder that was diagnosed and identified as a disturbance is in a form of remission. Flare-ups are highly probable if regular check-ups and preventive measures aren’t taken.