Transexual: “I Was Raped By a Prison Guard” 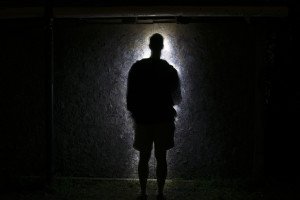 The alarm went off, signaling that once again the prison was about to be shut down and placed on lock-down because of the major fights going on between rival gangs within the prison walls.

So now, as usual, we were all going to pay, not just the guys fighting.

All I could think about, as the alarms continued to blare throughout the prison’s intercom system was, “Oh my god, I hope he doesn’t come for me.”

Being a transsexual behind prison bars is dangerous in itself. I mean, between the constant harassment of the guards that don’t understand this way of life, the inadequate medical attention in prison for transsexuals and the unwarranted sexual advances and/or attacks, it is like a constant nightmare!  I’ve lived with fear behind these walls for many long years.

As the air was filled with all the prisoners of all races, sexual orientations, and gang associations yelling from tier to tier – to let the other prisoners know that the prison was indeed on lock-down – I laid in my bed, my heart racing so incredibly fast I was sure that the prisoner in the next cell could hear it, even over all the chaos now going on all around me. Even through all the contraband being thrown from one cell to another so that people wouldn’t get caught with it in their cells… even through all the toilets being flushed to get rid of the contraband. For all I could think about was, ” I hope he doesn’t come for me again! Not this time!!!”

As the lights went out that night my heartbeat and pulse went up! My eyes kept a constant watch on my prison cell door for that all-to familiar “click” as the door is opened. I kept telling myself over and over, “Not this time; it just can’t happen again!”

It was quiet; around one or two in the early morning, and there it was — “CLICK!” — my cell door opened! I laid there pretending to be asleep, the now-opened door opened all the way – and he came in!!! Coming straight to my bed, he said; “You know what time it is; so don’t even bother to try to play like you’re asleep with me; you wanna be my bitch! Just get on your stomach and don’t make a peep; or you will be one sorry bitch!!”

Note: A 2011 Justice Department survey says nearly half the accusations of prison rape are aimed at prison guards or staff.

I looked up to my soon-to-be assailant and whispered, “Please, don’t do this. I don’t want to do this.” And with one of the most evil looks I’ve ever seen on his face he said, “What, you think you have a choice in this? You think I give a fuck what you want to do?! You want to be a bitch, right? Well then, I’m gonna treat you like one!” And then he hit me with the stick he had attached to his uniform’s side and began to unzip his pants and pulled out his sex.

As I began to cry and beg him not to do this, he pulled down my panties and straddled me as I lay there with tears in my eyes, begging him not to do this. But what could I do; he was a prison guard and I was a prisoner. He then forced himself on and into me, pushing my face into my pillow as I cried out in pain and shame!

After he left me there to clean myself I remember thinking; “I should have screamed like a wounded cat and hoped it would of scared him off.” I remember crying soooo much that I didn’t think I had one single tear left. I remember hating being and feeling so helpless.

Prison rapes are “REAL”!!! They are not a story that people make up to try and scare people. They happen prisoner-on-prisoner – and they happen staff on prisoner. They happen more than people would like to think or believe.

But you do “NOT” have to be a victim! There are organizations that will help you; there are people you can report it to who will listen to you and help!!! Don’t be a victim of prison sexual assault or rape, “REPORT IT!!!” You don’t to feel alone and weak. Your voice is the greatest weapon you have!

If you’d prefer to contact this author directly, please write to: