Please Mr. Postman, Look ‘n See, Is There A Letter In Your Bag For Me?

I want to talk about disappointment.

There is no internet access in prison — no-e-mail, texting, or IM. So if you want to communicate with someone, it’s either face-to-face, phone call, or snail mail.

Visits are best, of course; it is beautiful to be in the presence of someone you love. (Don’t have to come to prison to realize that.) But it is often difficult for folks to find or make the time to visit.

Phone calls are nice, too; with you ears constantly bombarded by angry words, foul language, and dead-serious discussions of trivial subjects, it’s a blessing to hear a sweet voice or a good conversation. Unfortunately, the phone rates are disproportionately high, the facility will only allow you to call numbers on an approved list—and if you think it’s difficult to coordinate with someone for a phone conversation considering everyone’s busy schedule, try doing it while competing with forty other men for the phone. 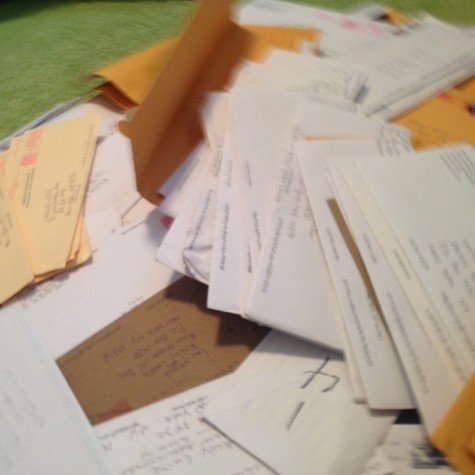 Letters, though – letters are uniquely special. You carefully consider exactly what you want to say, finding the perfect word, the perfect phrase to express precisely what you feel. Letters are the place for poetry, for sentiment too sensitive to be spoken. A letter is concrete, tangible evidence of an investment of time and energy—whether a little or a lot.

For the incarcerated, the letter reveals itself in stages. First, in its delivery. Who is it from? Is it expected, the fulfillment of a promise or commitment? Or a surprise, an unexpected break in a never-changing routine? Next, you pick up the envelope, feeling its heft in your hand (How many pages? One? Two? Ten?) and check the return address. Is it a family member? Maybe an old friend — or a new one. And this is all before you’ve even opened it.

Now, imagine what it’s like to expect a letter that doesn’t arrive. A visit that doesn’t show is disappointing, but it’s pretty clear-cut; once 1:30 rolls around and the officer hasn’t called your name, it’s time to get on the phone and find out what happened, make sure everybody’s safe.

But you can never really be sure that a letter isn’t on its way — especially if someone specifically tells you to expect it. You count the days, carefully calculating how long it should take for the missive to travel from those hands to yours. You are careful to give an extra day or two’s grace so you won’t be too expectant, too soon (but you still hope to see it on the earliest possible day). And if it doesn’t arrive by the day your math indicates—well, that’s okay; sometimes the prison mail is a little slow. It’ll probably arrive tomorrow. And if it doesn’t, well, you know the correspondence office is horrible with the mail. The letter might actually be sitting on the clerk’s desk. She’ll stamp it and pass it on tomorrow.

The thing is, the more days that pass without an expected letter arriving, the more likely it seems that it will arrive the following day. It’s a catch-22 of disappointment. Not the huge disappointment of a missed visit; that’s like someone just hauls back and knocks you to the floor. A promised letter that doesn’t show is more like being tripped than knocked down; it’s sneakier, and not as immediately painful. It’s just that you get tripped every day, until you realize that you’re waiting for something that isn’t going to happen. The little falls add up.

So. The moral of the story is: People let you down. Friends let you down, family lets you down – you let them down – that’s just what people do. It’s not intentional. When folks say they’re going to do something, they usually believe that they’re telling the truth. You don’t need to hurt their feelings; act like you believe ‘em.

I’m sorry. That sounded cynical. I’m not, though. I’m just saying, don’t expect much. That way, if they actually do come through, you’ll be pleasantly surprised—and if they don’t, you won’t be disappointed.

Actually, yeah you will. But hopefully not too much.