My Friend Died of Negligent Homicide in Prison — NOT Natural Causes

” …he allowed himself to be swayed by his conviction that human beings are not born once and for all on the day their mothers give birth to them, but that life obliges them over and over to give birth to themselves.”

Gabriel Garcia Marquez, Love in the Time of Cholera

It was in September 2013 that I first met him. He reminded me of a little three-legged runt puppy, the saddest of the litter who knew he would win no beauty prize and would be the last to go home with a loving family…

He was skinny and white and about 135 lbs. He was as beat up as an old brown Ford Pick up truck and was covered from head to toe in the undecipherable gibberish of 50 unfinished, fading tattoos. He has one of a giant screw going into his brain with blood dripping out around the base of the screw… it summed him up as well as any decoration could.

He had a laugh like a cartoon character, kind of a cross between Bugs Bunny and Woody Wood Pecker. A raspy like cough mixed into a canned laugh track. It was all due to a terrible case of asthma that had him hooked up to a breathing machine at night and inhalers all day. When he got excited, his laughs would turn into coughs and then into full-on bronchial spasms, which had the puzzling effect of making him laugh that much harder.

It was a vicious circle for him. He was back and forth to the Hospital and Medical with his never-ending tales of “them letting him die again.”

It was the center of his life, this bitter respiratory illness… but he wheezed and coughed his way into my life with a quirky, toothless smile, and all the frenetic energy of a penniless crack addict at the break of dawn, searching for a cigarette and a long, deep draw from the crater of his glowing pipe.

He was 52 years old — but when I looked at him, I saw an 11 or 12-year old little skinny sick kid that never got to grow up or know peace.

His father beat him and his Mom until he would pass out and couldn’t breathe. He woke up on the floor or in the yard with the dog licking his face. It’s unimaginable to me… but for him, it was what life was. At one point he just stopped coming home and started using his body to hustle. Men. Women. He said it really didn’t matter. He had long ago detached himself from his vessel and it was now just an instrument to make money… a means to an end… a tool. He hustled for food, for smokes and for a string of 20-minute highs he managed to thread his day with.

It is the Myth of Sysiphus – you never get

[the boulder] all the way up the hill … there is a gross of 20 minute highs in a day …you do the math. He was not always like this I say…none of us were really…but each life unfolds in a staggering diversity and randomness. Cruel, beautiful and indifferent — there is little hope that instinct will ever collide with self-awareness before our final ascent.

His name was Mark. Mark Wright. We called him Cowboy…and this past August…”Those People” finally did let him die. They neglected to treat him when he stumbled into the infirmary gasping that he could not breathe.

He said “I’m dying you stupid Mother Fuckers … I’m dying …” and because he was delirious from a lack of oxygen to his brain and his blood, I’m SURE he refused to leave the medical unit. So he was handcuffed and carried off to solitary … where he suffocated, alone, and silent on the cold concrete floor of his cell.

He died needlessly. Anonymously. It was a crime many men at this prison will do 10 or 15 years for. It is termed Negligent Homicide. A watered down murder charge. Murder, just the same.

Doctors do it. Surgeons do it… Murder without the intent. Intent is crucial to murder. No intent, no murder. It’s the kind of murder they let you apologize for. You do a 5-year suspended sentence, where you keep your life and your house and your wife. You keep everything … but the other sucker…he loses everything. It’s the kind of charge you see on the evening news.

Medical neglect in prisons?  Criminal Justice says, “Don’t mess with Texas. I’m sorry, boy. Good Luck to ya,” and the gavel sounds. We are just one of an endless flow in the cogs of our courts … and its a big, Red state.

His mail is now marked deceased. He does not make the Obits column in the local paper. No blank stare from a one-inch square picture of an earlier version of you when you could still smile or still had hair… no, none of that. Just his unclaimed property, a ravaged unclaimed body in a painted wooden coffin cut from the tall pines of this east Texas Machinery. 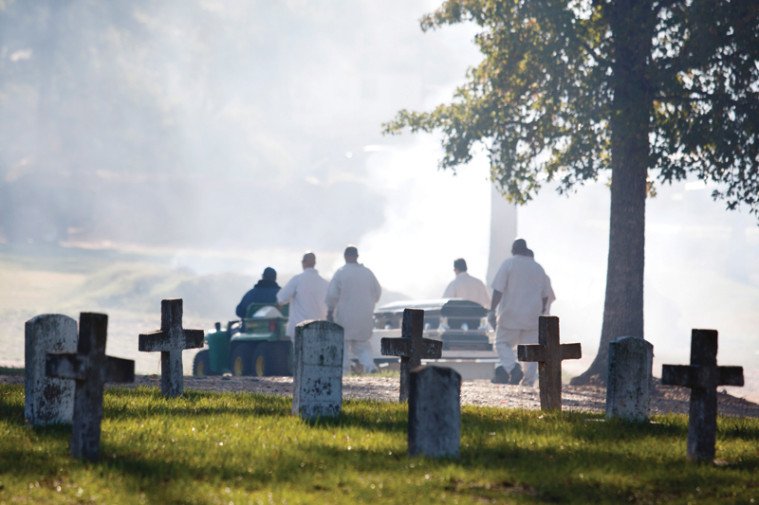 Of the roughly 450 inmates who die in Texas prisons each year, about 100 are laid to rest in Captain Joe Byrd Cemetery. CREDIT: Michael Stravato, Texas Observer

He lay now in a tiny grave dug by men in white and refilled some moments later by the very same men after the unit chaplain makes a final appeal to God to accept his body into Heaven and forgive him his sins. It’s as much as a ritual as any thing else here. I suppose we are lucky if the chaplain actually knew who we were. Maybe he will make a second, more personal appeal to God …or maybe run it by Mary… like the Catholics love to do…who knows…your mind does funny things to you in here.

I have 8 years under me now…with 6 to go. I have to be careful. I make sure the chaplain knows my name. I make damn sure that the Father …you know God…Jesus…and Mary know my name. I was even baptized a year ago. Cleansed and reborn with the promise of everlasting life. And I believe this. I live it now.

I do not think Cowboy Knew God. I somehow doubt he prayed. Part of that is my fault. I guess that is why I write this. I do hope that God was feeling especially merciful that August day, and rather than sending his 52-year old body for an eternal burn…he allowed that scared, shivering little kid, wheezing and gasping for life into heaven with him long before his lifeless body crashed coughing into the cold, concrete bottom of life.

Gene Walker is serving 14 years in Texas for Aggravated Robbery.