I produced an hour documentary on Kristin Rossum when I was a producer for CBS’s 48 Hours. Here is a summary. Did Kristin get what she deserved? 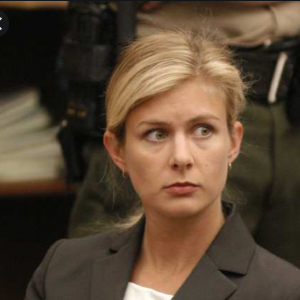 Kristin Rossum and Greg de Villers were newlyweds who seemed to have a wonderful future in front of them.

But beneath the surface, there were secret obsessions: addiction and betrayal.

Their marriage would end in a way no one could have ever imagined – one partner dead, the other accused – in a scene that seems stolen from the popular movie “American Beauty.”

But before the couple could celebrate their second wedding anniversary, Greg was dead, and Kristin was behind bars.

Prosecutors say Kristin staged a suicide scene with rose petals, reminiscent of one of her favorite movies, “American Beauty.”

But was it suicide – or was Greg murdered by his wife?

Now, she is facing capital murder charges in the poisoning death of her husband. Kristin says she is innocent, and insists Greg’s death was a suicide.

There are many questions, but one certainty: Kristin and Greg didn’t have a fairy-tale marriage.

“About a year into our marriage, Greg became very, very clingy to me. I was trying to pull myself away and have some sort of independence,” says Kristin, who decided to leave Greg and broke the news to him over the weekend of Nov. 5, 2000.

That Monday morning, while Kristin was getting ready for work, Greg stayed in bed. “He wasn’t getting up like normal. He was really sluggish, and his voice was slurred. It sounded like he had taken too much of something the night before,” she says.

Kristin, a toxicologist with the San Diego County medical examiner’s office, left for her job at the coroner’s office and called the biotech company where Greg worked to tell them he would not be in that day.

When she went home for lunch, Greg told her that he had taken Oxycontin and Clonazepam, a pain killer and a muscle relaxant.

After work, she found him in bed, asleep and snoring. Later that night, she says she noticed he wasn’t breathing, called 911 and tried to give him CPR.

It was at this moment when she says she made a very chilling discovery as she tried to move Greg to the floor: “I pulled the bedspread back, and his chest was covered in rose petals. Red rose petals. And he had a picture of our weddings photos in bed with him.”

“He had given me a dozen beautiful long-stem roses for my birthday. I think he was just making a statement that he knew our relationship was over.”

When the paramedics arrived, they tried to revive him, but Greg, 26, was dead. Kristin says she doesn’t know if it was an intended suicide or a cry for help.

Greg’s family and friends, however, were suspicious and pressured the police to investigate the death as a possible homicide.

Police quickly discovered that Kristin was a former drug addict who was taking methamphetamine again. Kristin says she first tried crystal meth in high school, and met Greg a few years after in Tijuana, Mexico. With Greg’s help, Kristin beat her addiction, finished college, and got a job with the coroner’s office.

“He was my angel because he saved me,” says Kristin.

After they were married, however, the dynamics of the relationship had changed, and Kristin finally told Greg she wanted a trial separation.

One of the reasons she wanted to leave was because, within the first year of marriage, she had started an affair with her married boss, Michael Robertson.

“We had a lot in common, we were both in relationships we weren’t happy with, and we gravitated towards each other,” she says. “And we loved each other.”

Kristin says she told Greg about her affair, and he became very obsessive. With the stress of her troubled marriage, she says, she went back to smoking crystal meth.

According to Kristin, Greg threatened to report her drug use and her affair to her supervisors, including Michael Robertson’s boss. Prosecutors say that she killed Greg because she was afraid he was going to expose her affair with Robertson and her drug use.

During the investigation, police discovered that Greg had a lot of fentanyl, a powerful pain killer, in his body. It can be administered by injection, or swallowed, or it comes in timed-release patches applied to the skin.

Fentanyl is not the kind of drug you’d find in your medicine cabinet. So who would know how this drug works, and have access to it? Kristin for one, because she is a toxicologist.

She also knew that her office did not routinely test for fentanyl in autopsies. And her boss and lover, Michael Robertson, knew that, too. In fact, fentanyl was missing from the place where Kristin worked – but she says she didn’t take it.

But if Greg did indeed kill himself with fentanyl, how is it possible that he left behind no evidence?

Kristin’s lawyer, Alex Loebig, says there’s no evidence because Greg got rid of it, to make it look like murder.

If he killed himself and got rid of the evidence, Greg was either very crafty or very lucky. Most experts say an injection would knock him out immediately, so he’d have to use the patches. The defense, however, argued that he drank it from a glass found at his bedside – which was never tested by police.

Prosecutor Dan Goldstein, however, says that theory doesn’t explain one crucial piece of evidence: Although Greg’s body had needle marks from shots administered by paramedics, there was one extra needle mark. That needle mark, he says, is where Kristin may have injected her husband with fentanyl.

Also, why not leave a suicide note? Loebig says Greg’s final wish may have been revenge against Kristin.

And how about the rose petals? Goldstein argued that Kristin got the idea from the movie and was trying to create a melodramatic suicide scene.

Although the evidence, at best, was circumstantial, it was enough to charge Kristin with murder. After six months in the Las Calinas Detention Center, Kristin was freed on $1.25 million bail.

She’s the only defendant in the murder trial, but the prosecution believes her lover, Michael Robertson, somehow helped Kristin carry out the murder.

Robertson, who was fired from the medical examiner’s office for not reporting Kristin’s drug use, is an Australian national. Shortly before Kristin was arrested and charged with murder, he went back to Australia. He says, however, that he is not hiding out in Australia, and that he is innocent.

But the prosecution says Robertson had a motive and opportunity. He and Kristin were seen together several times the day of the murder, both in and out of the office, having what witnesses described as “emotional” conversations.

Robertson claims that he had just learned that Kristin was using meth again, and he was confronting her about that. He says they were not plotting a murder.

Since returning to Australia, Robertson says he has not had contact with Kristin and is separated from his wife. After months of searching, he finally found a job in the science field. But he admits he fears that U.S. authorities will one day apply for his extradition, even though he believes his former girlfriend is not capable of murder.

While prosecutors have decided not to seek the death penalty against Kristin Rossum, they want to send her to prison for the rest of her life. Kristin, however, says her adultery was her only crime.

Just before the trial was to begin – almost two years after the death of Greg de Villers – another important piece of evidence surfaced: Kristen’s receipt from a supermarket on the day Greg died. She bought soup, cold medicine and a single rose.

Kristin says she bought a yellow rose and gave it to Robertson. But for the prosecution, the rose only confirmed earlier suspicions that Kristin was trying to stage a suicide scene from one of her favorite movies, “American Beauty.”

During her trial in October 2002, Kristin became the media’s main attraction. Cameras, banned from the courtroom, followed her fashionable entrances and exits. She was on the witness stand for more than eight hours.

The prosecution spent seven and half hours on closing arguments; the defense summed up its case in fewer than two hours. The jury deliberated for eight hours.

The verdict: She was found guilty of the murder of her husband, and sentenced to life in prison with no chance of parole.

Her parents say an appeal and a new trial are now their only hope.

Kristin Rossum has since moved to a prison nearly 300 miles away. Her parents Ralph and Constance Rossum treasure what little contact they have with their daughter – their monthly jail visits and her letters home.

Kristin is appealing for a new trial but it could be many months before the court rules. Her former lover, Michael Robertson, remains in Australia still under suspicion, but not charged with any crime.

Both Kristin and Robertson have been named in a wrongful death lawsuit brought by Greg’s family.

Whatever the outcome in the courts, the case seems likely to play out in the public eye. There are plans in the works for a book and movie.