How Convicts Got Joyce Mitchell To Smuggle Contraband Into Prison 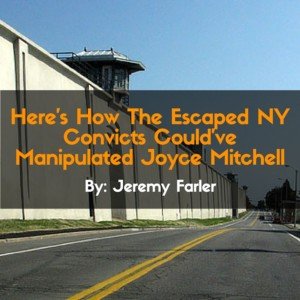 “Man, this shit is loose up there. One of these bitches is gonna go, but I think it might have to be a white guy.”

I can still remember my friend Drew’s face when he said those words to me, an excited, almost giddy expression that rarely graces the face of any incarcerated prisoner. Drew was telling me that one of the female employees had displayed tendencies that he associated with a willingness to develop a personal relationship with an inmate. By saying it was “loose,” Drew was letting me know that there was room to work on her, meaning security wasn’t very tight. Finally, Drew, who is black, was letting me know that he thought she’d be more comfortable with a white guy. Gathering all this information from those two sentences, my response was a simple one – “Oh yeah?”

We live in a temple of doom, ready to embark on the next crusade to find our holy grail – a C.O. willing to do our bidding. And you have to understand; my friend Drew wholeheartedly believes he can pull any female you put him around for any extended period of time. It’s part of what I connect with him about because, if I’m being honest, I believe the same thing! That type of confidence is required when you’re trying to convince a Corrections Officer to put his/her job, reputation, and very freedom on the line for you.

See, Drew and I belong to a class of inmates that I like to refer to as the penitentiary versions of Indiana Jones. Always on the hunt for the next adventure, always with an eye on the treasure at the end, and always eschewing the dangers that lie between us and that treasure.

And after a solid month and a half of pursuing the GED teacher and still not being able to make any headway, I asked Drew if he could still get me a job that allowed me to work in close proximity to multiple COs, which is absolutely key in trying to develop a relationship.

There are different ways of doing this, and different opinions on which is best, but there are generally one of three “needs” that a CO is missing, and which you must first identify and then provide for them somehow, in order to get them on your side: Money, Excitement or Love.

In 2015, two inmates convinced Joyce Mitchell, a prison staffer, to help them escape from prison in upstate New York.

The latter of these is the trickiest, because love is a fickle bitch, one which can turn on you at any moment, leaving you under the thumb of a scorned woman. Not pretty. The COs looking for excitement only, generally males, are a truly rare find and are the most prone to backing out at the last moment. These men are usually the ones we called “nerds” in high school, and who are still looking for a way to join the “in crowd.” Less rare, the COs needing a little extra money. These officers, again usually males, are also the easiest to understand. Most people in the world could use a few extra bucks, and so when these COs realize they can bring a package no bigger than a quarter roll into the institution and be paid handsomely, it becomes logical to them. Problem is, you have to pay these men up front before they bring your pack in, and the price tag on that is generally between $500 – $1,000 per package. Not bad when you consider the money that can be made from a single drop, but most inmates, including Drew and myself, don’t have money like that lying around.

Therefore, we are left chasing that angel-faced devil, Love, and twisting it into an unrecognizable perversion that can meet our needs.

When I walked through the door my first day at work [as a GED tutor] and locked eyes with her, a sort of sick version of love at first sight, the joy of the chase ahead was almost overwhelming.

I’ll call her “Trisha”, and I can only describe her physical appearance as unflattering. She was in her early 40’s, severely overweight, and had a face that lacked symmetry associated with beauty. All good signs for a lack of self-esteem, which is of critical importance in this game. During the course of the day, I made my way to her and introduced myself, attempting to exude the confidence I felt she may lack by making direct, unbroken eye contact with her. When she was unable to hold my gaze, often looking down instead of at me, my suspicions were confirmed. Check.

Over the next few days and weeks, I began building a rapport with Trisha, one filled with smiles and inside jokes. Happiness is contagious, and allowing her to see me act happy showed her she can be happy with me. I started making little jokes at the expense of our co-workers, too. Nothing harmful, just playful little jabs about how lame they were. Just some small observations about them, so that when they did something we had talked about, like repeat a favorite saying of theirs that Trisha and I had termed “goofy,” we could smile slyly and look at one another, making this fun belong only to us. Small secrets lead to big secrets. Check.

Next, I saw her saving containers from work, piling them up near her station to take home. When I asked her about them, she said she goes home and makes little houses and bowls for her cats to play with. What I heard was the desperate cry for excitement and need for an escape from her mundane life. Check.

In response, I began regaling her with exciting stories of things I did before I got locked up. Stories about running from the cops and the close calls with death I’ve had; always conveniently leaving out any of the negative consequences of course. It was about a month or so into my pursuit when she came to work and told me she had caught a boyfriend cheating on her. That was just the kind of break I’d been waiting on. “Cheating on you?!” I said with a shocked tone. “That’s crazy!” “It wasn’t with one of your friends was it?”

“I don’t have any self-esteem,” Trisha said, staring at the ground. “No self-esteem? I mean, you’ve got a good job, you’ve got your head on straight, paying bills, staying faithful, and you’re obviously attractive, so what’s not to be proud of?” was my reply, punctuated by then walking off shaking my head in amazement. By doing so, I implied that I could see something in her that no one else — not even herself — could see. She had let me deep into her personal life now. Check.

After a few more days, I said, “Don’t you think it’s boring how we have to talk to each other?”

“I’m just saying that I really love talking to you, but hate that I have to be so careful because of all these other ears and eyes around us. I wish we could just talk freely, don’t you?”

She took the bait. “Yeah, I’d like that too,” she said longingly. So I pounced. “Well, there is a way, you know. But, it means you would have to do something a little dangerous…” I had to throw that excitement opportunity in there, of course.

“Well you know cell phone technology is amazing these days,” I said with a wry little smile. “Be great to hear your voice before I lay down every night.”

Again, I walked away, leaving her alone to ponder her decision. You always gotta leave them wanting more. About an hour later, she walked up and said the magic words…

“Go to the dollar store and grab a cheap little flip phone for like twenty bucks. Buy one of those fifty dollar unlimited plans from T-Mobile that you renew each month, but don’t put it in your name. Bring it in tomorrow morning, go the bathroom and slide it and the charger under the little locker in there, and I’ll go in to clean the bathroom first thing when I get in,” I said without hesitation.

“I can’t tell you that. You come through the gates every morning, so only you know how they search as well as where they don’t search. So that’s on you. Think you can do it?”

I could barely sleep that night, the anticipation was so great. When I awoke the next morning; I listened intently for the officer’s radio, trying to hear if anything was amiss. When they released me for work, I headed straight there, grabbed a broom and mop and hit the bathroom. Lifting the locker with bated breath, I saw laying there the tool I needed in order to reconnect to the outside world, to regain some semblance of normalcy, and to begin trying to make money.

By contact, all she saw was a conversation with me. To that point, there had been zero physical intimacy between us, but that’s unnecessary when you’re dealing out dreams instead.

Around two weeks into our phone conversations, and after feeling confident that I was beginning to own her heart, I fired the final shot; the shot this entire battle had been waged for. Cloaked in a sweet, sugary coating, of course.

“Listen, I don’t want to be a criminal when I get out. I want to have a normal life with you out there, but in order to do that, we have to be comfortable financially. I want to be able to provide for you now, and to be able to put some money up for us for when I get out, too. For me not to be a criminal later though, I need to do some criminal shit now, and I can’t do it without your help. It would mean meeting somebody for me, bringing something in for me, and then letting me take care of us from then on. Whatya think?”

Without blinking, her response was, “I’ll do whatever you need me to, baby. I love you and I don’t wanna lose you.” Checkmate.

Stories abound from our nearly 6-month long relationship, ranging from the hilarity of guiding her through her first prison relationship, to the fear of nearly being discovered, and ending with the many pitfalls of being the man in charge of smuggling contraband into a prison facility.

A series of unfortunate events eventually led me to losing my job, going to solitary and Trisha quitting her job. All three of those events were unrelated to one another but all tied to the same post at their cores. After the smoke cleared though, Drew and I stood as always, looking for the next adventure.

Jeremy Farler is serving 10 years in Kentucky for robbing an auto parts store.