Anomalies? Isolated incidents? Freak occurrences? The answer is none of the above. For those of us who’ve lived inside the Florida prison system for decades, it is called “business as usual.”

Thanks to whistleblowers stirring up a maelstrom of media attention over those and many more incidents, Florida politicians and the public are demanding that changes be made to a corrupt prison system that has bumbled along on its own for decades, the massive prison bus carrying 100,000 prisoners and 20,000 employees driven by a succession of “Good Old Boys” who have grown fat on prison largesse.

Can the prison system be fixed? Can a new leader come in, wave a magic wand, and erase generations of abuse? Is it possible that a new Florida Department of Corruptions — er — Corrections, can emerge on the other side of a cleansing process that will end the frequent beatings, gassings, civil rights violations, and worse that have been occurring all along?

The answer is yes and no. Yes, if good faith efforts by Governor Rick Scott and the Florida Legislature to clean up the mess that has accrued for over a century were followed through with new, enlightened leadership that was given carte blanche to sweep the prison system clean. No, if token efforts by the same good old boys result in just another dog-and-pony show for the camera and politicians, with a coat of fresh paint on the buildings, the green lawn neatly trimmed, and tranquilized prisoners sitting quietly on their bunks until the group goes out to the administration building for the requisite luncheon. In that case, nothing will have changed.

After reading newspaper accounts of the most recent scandal involving KKK prison guards and their thwarted murder plot, an African-American prisoner commented, “Them peckerwoods been doing the same thing since they lost the [Civil] War.” I must agree.

Why has “The System” withstood every effort to purge the bad apples and replace them with decent, honest people who will obey the law, enforce the rules fairly, and allow prisoners to do their time in an atmosphere conducive to personal growth and rehabilitation? To answer that question, one must examine the roots of the prison kudzu vine that has grown so large and ungoverned that it chokes every effort to reform it.

The Main Housing Unit of Union Correctional Institution near Raiford, Florida was Florida’s first modern penitentiary, a three-story concrete house of horrors nicknamed “The Rock” that imprisoned thousands of men from its opening in 1913 until its closing over seventy years later. Uncountable blood sacrifices anointed The Rock’s floors over the decades. It was home to Florida’s Death Row and “Old Sparky,” the electric chair, until Florida State Prison (FSP) opened across the river in 1961.

Union Correctional’s old-timer guards who were still around in the 1980’s (when I served my time there), delighted in sharing their joy at dragging condemned men from their cells, kicking and screaming, to be strapped down in Old Sparky and electrocuted. Their identities were supposedly secret, but every guard knew who the executioners were and vied for the honor of being chosen to pull the switch.

Guards’ children grew up eating state pork chops from pigs raised at the prison hog farm, listening to stories of fathers who regaled them with their rites of passage at the prison. Those children who went to college rose through the ranks quickly to become prison administrators in the state capital.

Others became police, sheriffs, or businessmen, then county and state politicians, completely controlling the prisons in “The Triangle” of North Florida counties. They married and intermarried; they were fruitful and multiplied, and certain powerful patriarchs controlled large voting blocs. State politicians courted them. Outsiders who got jobs in those Florida prisons were viewed with suspicion and soon sought jobs elsewhere.

From the Tampa Bay Times:

Almost half of the DOC’s 12,292 corrections officers have less than five years’ experience; many are the sons and daughters of former Corrections employees, and many have married within the department, making life at the DOC something of a family affair.

Is it any wonder that they get away with murder? In the 1980’s on 60 Minutes, Dan Rather interviewed a prison enforcer who confessed to murdering another prisoner at the order of a guard. The guard denied it… and got promoted. 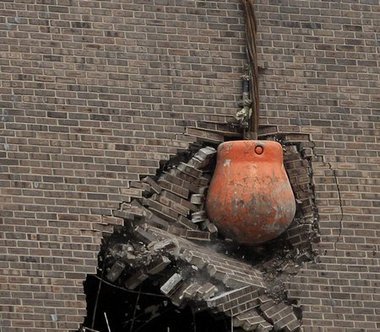 No matter what good faith efforts are undertaken by state politicians to clean up the Florida prisons, it is unlikely that anyone would be willing or able to dismantle the interconnected blood and marriage ties that dominate the present-day Florida Department of Corrections.

Prisoners who witnessed the first attempt to demolish “The Rock” described a crane that swung a steel wrecking ball against the thick concrete wall. The large ball bounced off the wall time and time again, to no effect. It wasn’t big enough. The construction crew returned days later with a bigger ball. Old-timers scoffed. The Rock would never fall. To their surprise the wall crumbled with the first impact.

To those who hope to rebuild a corrupt system, I say, get a bigger ball. The little ones just don’t work.

Charles Norman has been serving LIFE for 1st degree murder in Florida since 1979, a murder he says he did not commit.