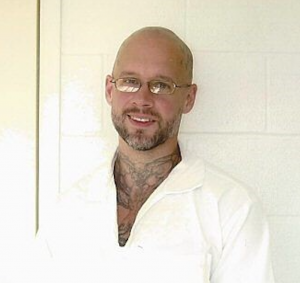 With light being shed on police abuse against suspected lawbreakers this summer, I wonder if the public has taken that newfound knowledge a step further. Black lives matter, but do incarcerated lives matter? Have they thought: “If that level of abuse is happening in the criminal justice system, what is happening out of the public’s prying eyes – namely inside the prison system?” It is a broken system that torments those it imprisons, but where Republicans love to send people in the name of law and order. This is the same group that opposes a woman’s right to choose based on their holy text proclaiming “thou shalt not kill.” Yet they support killing in the form of execution. Let me tell you what this so-called “law and order” looks like from my space at the bottom.

One morning after breakfast, before the outcry over the murder of George Floyd, I was waiting to go back to where I make my meager “home”. Chow was done and the last prisoner out was being surrounded and yelled at by guards. I’d seen this prisoner around because he’s hard to miss – it’s difficult to miss someone who walks around after defecating on and talking to himself. This prisoner has major mental health issues, so when given orders, it takes a while for him to understand. The guards finally yelled at him to “face the wall” due to his inability to comply with any of the orders given.

“Facing the wall” is the prison equivalent of a police officer ordering you to get face down on the ground, oftentimes with the same result. In fact, some prisoners choose to start swinging when those three words are spoken, as if they are a bell in a boxing ring. Can you blame them, knowing what’s about to happen? I can’t, especially since I’ve seen a number of prisoners obey this order and then be brutally slammed to the ground and jumped on by prison guards. One prisoner was even kicked in the mouth so hard it caused his broken teeth to come tumbling out between his lips, like small candies from between a child’s fingers.

The mentally ill prisoner finally faced the wall…and then the sickening sound of flesh slamming on concrete echoed in the hallway as a Captain bounced the prisoner’s head off the wall and threw him to the ground. Then, like a pack of hyenas on a wounded impala, four guards jumped on him and, even after he was handcuffed, they continued to kick and punch him. You read that right – they beat on an intellectually disabled man after he was restrained! Is there a video of this being shown all over the media? Are there cries for justice from the public? No, but this is the end result of the exalted law and order Republicans hold so dear.

The prison system that warehouses me, along with thousands of other humans in its one hundred plus prisons, is in Texas – a political powerhouse of the right wing. Do you think churchgoing, God-fearing people know about the horrible things that take place inside their state’s prisons? Or how about the fact that when the Texas government meets every two years, they’ve repeatedly turned down the call for a prison oversight committee that would watch over and hold its prison officials accountable for their abuse? Also, consider the fact that Texas locks away so many people that almost everyone in the state knows a prisoner personally and what they’ve experienced inside. Yet most Texans vote for Republican law and order, which equals pro-mass incarceration with long sentences.

I am one of many prisoners serving a life sentence. I’ve done almost twenty-two straight years, starting when I was barely twenty years old. Do you think I’m the same man now? Is anyone the same person after twenty years? Shouldn’t that matter if I’m locked away to pay for my crime and to rehabilitate, and not for spiteful revenge? Yet this is what “law and order” looks like in Texas: to be locked away forever, abused and tormented for crimes we committed decades earlier that no amount of remorse will ever change. I hate this existence so deeply that I wish I’d never plea-bargained my way out of execution.

Since Texas is a red state, most of its people oppose abortion due to their religious beliefs. To them, it’s viewed as murder – they even hold protests against it. Yet these same people aren’t protesting the death penalty, which is clearly murder. In fact, by supporting Republicans they support the death penalty, and choose not to vote Democratic due to their perceived pro-choice views. Does that sound as ridiculous to you as it does to me?

Many people living in this manmade hell, including myself, don’t fault the Republicans and their murder doublespeak because we’d rather have the peace that comes at the end of the needle than endure a lifetime in this hellish prison system. The high rates of suicides and suicide attempts by prisoners reflect this. Maybe Texas is a “red state” not because of its Republican allegiance, but because of the blood shed within its criminal justice system.

Think about this broken system, a system that lets those in power abuse the powerless unchecked. For decades and more, it has been a system that locks up people by the thousands to the point that those imprisoned would rather have the hypocritical death penalty. Now I ask you to give some thought to the name “criminal justice” itself. Who is the real criminal here? And where is the justice?