I Taught Myself Yoga In Prison – And It Changed My Life

Many are intimidated by the expensive trappings of yoga. When you take away all the specialty items, forget the retreats to faraway places, and make do where you are with what  you have, yoga comes alive. Yoga’s roots were in a hovel; it has only recently taken to life in palaces.

I began my yoga practice at Telford Unit on the unforgiving concrete of my prison cell floor without a mat to cushion my bony butt. Like 165,000 others doing time in Texas, I thought those “Don’t Mess With Texas” signs were talking about littering.

Prison tends to intrude on my attempt to live a yogic life. That’s to be expected. Since Christmas, 2009, when I first began my yoga practice after receiving “The Everything Yoga Book” as a gift , life has been more interesting. I thought my being in solitary would make it easy. It didn’t.

My odyssey began with the decision to overcome the many obstacles that prison’s austere nature placed in my path. Searching for a beginning practitioner’s props soon made me aware of how little was available, but making do is what prisoners do best. With only one blanket and no pillow, things were difficult. At least my dictionary is a big hardback I could use for a block. That helped. There was no way my broken-down old body was going to bend that far to start with. Maybe not ever.

My body is far from pristine: both legs were broken when I was hit by a car in 1975. A separated shoulder never healed right from lifting weights in 1989, and numerous other injuries accumulated in over fifty years of hard work, harder streets, and the hardest life I could have put myself through. Breathing would also be a problem. My nose has been broken a time or ten. Every time I’ve begun an exercise program some muscle or joint has been torn, and every the time it heals I have to start over. It’s a cruel cycle of much pain for no gain .

Scheduling undisturbed time when guards wouldn’t be escorting nurses with medication or my peers to recreation and showers, delivering meals, counting, passing out mail, or exchanging our dirty clothes for clean ones was a challenge. People expect prison to be strictly regimented. It’s not. There are too many variables in play that cause the timing to fluctuate.

Shift change never varies. Twice daily, at 5:30 a.m. and 1:30 p.m., one group leaves and the other comes on duty. The shift leaving tries to spend as much of their last hour relaxing by the exit as they can and those arriving put off starting their day as long as possible. You can depend on it. Mostly.

Both shifts feed a meal right before leaving. You seldom see them after they pick up dirty trays. If I place my meal in a plastic container I can let it warm in my hot pot while I do yoga. Hot food after yoga is an added incentive since trays are usually served cold.

Cells don’t provide much room. When you take a 7′ x 9′ foot square room and add a bunk, a desk and a toilet/sink combo, there isn’t much floor space left. Between the foot of the bunk and the cell door is just enough space for this 6-footer to do Locust postures. For Supta Pandangusthana I & II, my legs are between the desk and toilet, and my left foot ends up in my locker under the bunk as I snuggle my hips to the toilet bowl. I’m glad to be assigned here. This prison has civilized-sized cells. The last prison I lived in, Ellis Unit, had much smaller cells. There wouldn’t have been room for yoga at all.

The Gross Things Prisoners Do When The Water Is Shut Off

Prisoners are pack-rats. We have so little that we save every scrap we can in case of need. When I had to find a strap to use with Supta Pandangusthasana I & II, I pulled out an old pair of socks I had bought back when prisoners in ad-seg

[Administrative Segregation, a form of Solitary Confinement] were allowed to make such purchases. That’s no longer the case since prisoners used the elastic to make slingshots.

I have to wear the torn up and shrunken state socks now. Instead of slingshots prisoners now make very effective blowguns. The state socks have the same elastic, but for some reason they don’t violate the rules. Probably this is because it was never sock elastic they used to make slingshots anyway. My old socks made a great strap and since they are mine I can’t get in trouble for tying them together to form a loop. (Guards don’t like to see us misuse state-issued clothing.)

I didn’t have to use my dictionary as a block for long. Soon I was able to reach the floor with my hands doing Utthita Trikonasana. The bound-up muscles stretched and loosened. It felt good. Having spent 35 years favoring my right leg had made my body unbalanced and misaligned. It was harder to bend to the left and keep my knee straight. It was the same in Bathara Parivartanasana: when my knees went left my right shoulder lifted. Still does. I feel the pull in my right hip, but daily it improves. 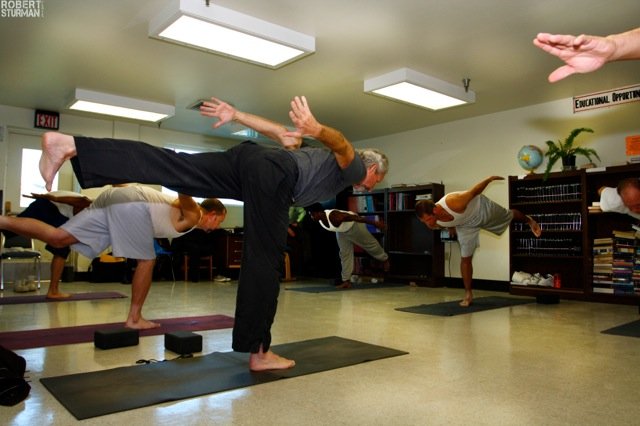 A number of factors conspired to keep me from running during the first month I practiced yoga. My yoga routine had expanded to over 45 minutes a day by the time the weather cleared, officers quit playing hookey, and I got my lazy bone under control. Normally I ran for ten or twenty minutes and walked at a brisk pace for the rest of the hour. After a month off, I expected I’d be doing very little running that first day when I returned to outside recreation. Much to my surprise I was still running and breathing easily when my hour was up. Yoga had made a difference in my physical stamina when I was doing nothing else. It’s the only explanation.

Though sitars might be better suited to accompany yogic activities, you have to be realistic. In Texas there are three choices; steel guitars twanging, Spanish accented accordions or rocking electric guitars. Silence isn’t an option. Prison can be quiet, but you can’t depend on it to stay that way.The beat of classic rock and roll, the music of my misspent youth, moves me through my Asanas.

Speakers are not allowed, though my peers have learned to build them from scratch with scraps of wire, old magnets, paper, cardboard, and peanut butter jar lids. I just roll stiff paper into megaphones and place those over my headphone speakers. It’s all I need thanks to a friend boosting my radio’s power before he finished his 20-year sentence and went back to his home in Tennessee. Every time I listen to my radio I have to wonder how he’s doing after having to spend so long in Texas prison and so much of it in ad-seg.

Once I realized how much I enjoyed Hatha Yoga, the next step seemed to be applying yogic principles to all aspects of my life. I had skipped ahead to the Asanas. Doesn’t everyone? As I read about the Six Branches of Yoga, I found I had unknowingly been involved in three before I began my practice. I never even realized these three had anything to do with yoga.

The contemplation required of practitioners of Raja Yoga is often practiced by prisoners, especially those of us held in solitary. We examine our lives and how they went wrong.We study our spiritual natures and the spiritual realm in search of answers that might give our circumstances meaning. Mine is a contemplative community of one, though my insights are shared with those that ask.

The foundation of my belief is that living a spiritual life requires tolerance of those that believe differently. You can’t prove or disprove the realm of the spirit. God’s existence, or lack of it, is a matter of faith and each person has a right to self-determination. No reason to argue.

The path of service that is Karma Yoga is rare in prison. Surprisingly, this is another branch of yoga I unknowingly practiced. It’s hard here, where every act of kindness is suspect and might be perceived as weakness.

My friend Ramsay led me down this path by sending me more books than I could ever read – so I could pass them out to others and create cycles of giving that did more to rehabilitate me than punishment ever could…and that was always her goal.

Seeing the divine in everyone in prison is difficult. Bhakti Yoga is a challenge in this violent world. Racism is the norm. Most prisoners validate themselves through hatred of gays and sex offenders. Trying to accept others as divine beings has led me to see the divinity in myself. All prisoners have a right to serve their sentences in peace. It’s not our place to punish each other. Changing our perceptions of those around us would make prison more humane, but it’s up to prisoners to open discussions of their right to be free from violence no matter their crimes. Bhakti Yoga could be the catalyst to initiate those discussions.

No one controls every aspect of their lives. Prisoners, by their choices, have surrendered what little external control they had. What everyone, both free and incarcerated, can control is themselves. Yoga in prison has extended my control and brought my life into balance. My blood pressure is lower, circulation is improved, my temper has been mellowed, and depression alleviated.

During my Asanas, my Mountain tends to tremor, Tree sways as if in a breeze, and sometimes Half-Moon is eclipsed unexpectedly. Yoga does not require perfection to be effective; it only takes perseverance, and anyone can practice wherever their journey might lead them. If I had practiced yoga for the past fifty years, instead of doing drugs, drinking, and crime, I might be in a better place today. Practicing yoga in prison now assures I’ll be in a better place tomorrow, even if I’m still here.

If you’d like to write Daniel a message, please send to: