How A Dogs in Prison Program Changed My Life 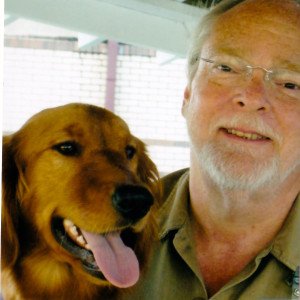 I am often amused by the prison stereotypes I run across in the media. We are all big, buff, tattooed beasts who spend our days pumping iron, slugging the boxing-bag, and intimidating the other stereotypes: weak, effeminate youngsters, barely-bearded.

While there are a few who fit those molds, the reality – at least in the Kentucky prison system I’ve spent the last decade and a half in – is quite different. Mostly tired, greying middle-ages hillbillies with a spreading middle who spend their days either lining up for chow, talking about what’s for chow, eating chow, or reminiscing about chow of the past. They may take a brief break from this pattern to mop a floor, play a game, watch TV, or take a nap. In this way, prison mirrors life in Kentucky-at-large (c.f. recent studies ranking the Bluegrass as one of the fattest states – but, that’s a topic for another essay).

Now, the shameful admission: After my first 10 years or so in the system, I found myself resembling the above more than I wanted to admit. Or accept. Over the years I made the usual progression from puffy to pudgy – from plump to paunchy, but it was when the doctor used the “o” word (please don’t make me spell it out) that I decided I had to do something. So, I embarked on a regimen of diet and exercise, and got myself under control. End of story.

In reality, physical effort has never been my friend. I’m more the sensitive, intellectual type. Or, so I tell myself. The recreational sports available in prison are limited to start with. I’m not much into basketball or working on the Nautilus (free-weights having long ago been taken out of max-security prisons; you can make weapons out of those things.) And shooting pool or playing softball lacks something when you take away the beer.

As far as diet is concerned, you have a choice of meal plans. You can eat the high-calorie, high-fat, high-gluten meals they serve, or you can go to the commissary and buy processed, packaged, and pretty-bad-for-you snacks and cakes at inflated prices. So, my fitness program was doomed from the outset. It consisted of maybe a walk or two around the loop once or twice a week, weather permitting, and skipping the bread and potatoes at meals – which is the majority of the meals – and trying to assuage my hunger pangs.

Then I joined the dog training program.

Now let me dispel another stereotype. While there are plenty of prison dog training programs throughout the country, the one here is not going to be featured on Animal Planet. While others tout their record in creating service dogs for the handicapped, or companion dogs for returning Vets, ours was simply a socialization and care effort for rescued dogs from a metropolitan dog pound.

We got strays and turn-ins – the unwanted. And they came to us smelly, debilitated, poorly fed and, often, with some challenging behavior problems. We would clean them up, fatten them up, calm them down, and get them adopted as household pets. Nothing fancy. I suspect the majority of dog training programs are more similar to ours than to “Pit Bulls & Parolees.”

I’m not going to go into a long description of our rehabilitation methods for one reason – there is no recipe that works for all dogs. I had to come up with solutions for each dog based on its particular needs. But there was on constant I used with every dog I had.

Not all of my fellow dog trainers agreed. Their methodology ran the gamut from coddling to clicker-training, from hand-feeding to halters to homemade dog treats. And I used all of these from time to time during my tenure.

But every dog got walked. Even the three-legged Golden Retriever they gave me once. And, he wasn’t the strangest. I had fearful dogs, aggressive dogs, hyperactive dogs, lazy dogs, tall dogs, toy dogs, underweight dogs, obese dogs, dogs with environmental allergies, food allergies, dirt and dust allergies. I even had an exceptional Setter mix with a case of O.C.D. that would make Rain Man look well-adjusted.

And the first thing all of them had to learn right off the bat was to go walking with me. A little at first. Maybe just a lap around the track – maybe just out to the track and back. Sometimes just out the front door and right back under the bed. Whatever it was, we would do it several times a day. And while the dogs in prison all benefited from the exercise and bonding time, it was my waistline that showed the most improvement – as well as my arteries and blood chemistry – or so the doctor says.

The neat thing about it was that the motivation I needed to get moving was right there – looking at me with those soulful eyes, or whining and sighing, or grabbing my pant legs, or bringing me the leash, or in a variety of ways signaling to me that if I didn’t get off my neck and “leash-up” there was going to be an accident. And in a 6-by-9 cell that can be particularly unpleasant. 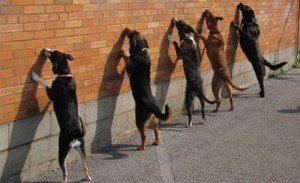 “Up Against The Wall!” Kentucky Inmates teach their dogs to perform a trick. Courtesy of “Manners for Mutts.”

One of the things I noticed universally was that no matter what the breed, size, shape, age, or problem, the dogs in prison came to love their walks – to look forward to it – to cue into my “going out” signals (getting my shoes on, getting the coat out of the locker or, sometimes, just sitting up) and showed their excitement by wagging, wiggling and the ever-endearing play-bow.

And, I did, too. Each morning I would watch the clock, waiting for the yard to open – having been showered, shaved, dressed and “leashed-up” for hours in anticipation. I hurried the officers through their obligatory counts, claiming my dog needed to “use it” badly – trying to rush the all-clear for our afternoon walk. Even asking for special escorts, once or twice, for a middle-of-the-night excursion with some special-needs canine. Even corrections officers have a heart, sometimes, when it comes to a dog.

And boy – did it pay off. I got back to my high-school (well, maybe college – or grad school) weight. My obese dogs trimmed down, my skinny dogs muscled up, my fearful dogs became more friendly, my aggressive dogs became less terrifying, and my hyperactive dogs calmed down. Oh and the sweet, O.C.D. dog? He gave up licking and chewing on himself, and started bringing me his leash and a ball when he felt anxious.

Dozens of dogs – all rehabilitated, groomed, and adopted – and with each one went a personal note from me describing that dog’s particular regimen, and emphasizing the walking routine.

See, the cool thing about designing your fitness regimen around dogs is you can’t toss it into the garage and forget it, like you did with the weight bench, treadmill, and stair-stepper. You’ll do the walking, because you love your dog, or because you’re concerned about your dog or, at times, truth be told, just because you gotta take the damn dog out. But, you’ll do it – day after day, year after year – and it will pay off, for both of you.

Besides, what other exercise device will jump up and lick you in the face when you start to put on your sneakers?

Robert Molloy is serving 30 years in Kentucky for the murder of a teenage boy who left his home in Florida to live with Molloy.

We submit comments to our authors on a weekly basis, but if you’d prefer to contact this writer directly, please write to: