Heather D’Aoust has written 30 tips for Surviving Prison. Here is Tip #1. What I Wished I’d Known at Age 14.

I got arrested at fourteen facing the threat of a life sentence, and at sixteen I was sentenced to 16-to-life in the California Penal System. I am going to take time to tell you the things I wish I had known when I was fourteen, before growing up in the system. I would like to think that if I had known these things prior to my arrest, my life would have taken a different path. I hope my words can help teach my readers what it is like to not only become rehabilitated by “the system,” but what it is like to survive the rehabilitation process itself. 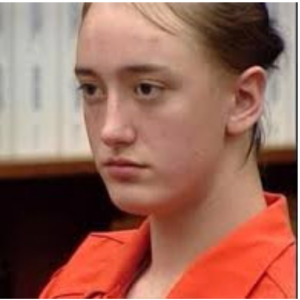 I wish I had known what it was like to wear chains while walking to court appearances; the fact that if you don’t wear several pairs of socks your ankles will get raw, the painful friction cutting to the white meat. I wish I had known that when there is no toilet paper, old books have softer pages to wipe with than new novels.

I wish I had known to check my milk and bread for expiration by taste, sight, and scent, instead of trusting the food handling in the average institutional kitchen to keep them fresh until the sell-by dates.

I wish I had known that no one wants to hear an accurate confession when it comes to the past: what they really want are apologies and self-blame.

I wish I had known that when your friend hangs herself it won’t matter how loud you scream and yell for help, because the cops won’t answer until their scheduled hall check in an hour.

I wish I had known that if you are in solitary confinement with no toilet and you have a choice between a milk carton and a blanket to go to the bathroom in, the blanket will stifle the smell and you won’t vomit even though you will be cold. The milk carton may be neater and less humiliating, but it can not handle how the stomach reacts to malnutrition.

I wish I had known that any relationship you try to hold on to will fall apart within two years, or they will leave and return at their whims despite how badly they’ve broken your heart. They will figure you have nothing but time to forgive them.

I wish I had known that if you find yourself in a domestic abuse emergency the sergeant will only smirk at your sexual orientation when you ask for help. The concussions will go untreated. Don’t fall asleep.

I wish I had known that when you have heart failure you will wake up in a cell chained to a gurney mat on a mobile vital machine with blood and feces nearby because the hospital does not see you as a human. Your DOC number will come before your name on the patient roster.

These are a few things I wish I had know, but more than anything I wish I had known this: when you take a life without mercy, that life does not vanish. You will see your victim every time you close your eyes at night, and true remorse is more of a prison than any cell could ever be.

Rehabilitation is the revelation that you must be humble to the point of breaking. You must bow until you become a flat board to be walked upon, and then bow even lower. Rehabilitation is the process of falling and not catching yourself when you have the opportunity. When you smash into the floor, instead of trying to pick yourself up, you learn to stay there and let the blows fester in hopes that you grow from it. The question is not if you will rehabilitate behind bars, it is if you will survive the process.