Getting Parole Is A Sham In Texas 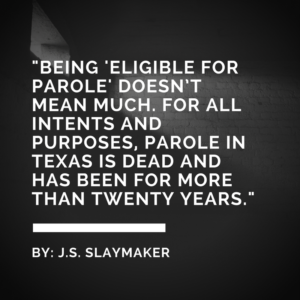 The best thing about being in prison is getting out.

To do that, an inmate has two options, aside from dying while inside. The first is to serve it out in full, day for day. The second is get out early on parole. And to do that, you have to “act right” and accumulate enough good (conduct) time to get out early for good behavior.

Wrong. Being “eligible for parole” doesn’t mean much. For all intents and purposes, parole in Texas is dead and has been for more than twenty years. It is standard operating procedure for people to come up year after year only to receive “set-offs” for various reasons or even no reason at all. More times than I can count, I have seen this occur until only a year or two remained before a person discharged the entirety of their sentence.

“Unsatisfactory institutional adjustment” is the State’s fallback position, the excuse they schlep out to deny someone parole when they don’t have another legitimate reason. In 1993, I had a cellie at the Coffield Unit doing seven years for aggravated assault with a deadly weapon. When I met him, he had somewhere between three and five years completed. The BPP told him that in order to be considered for parole he would have to 1) go to work (he was a full-time student which is considered the same); 2) get his GED, and 3) keep a clean disciplinary record, which means to stay away from the major cases. During the time that we were cellies, he accomplished all of these stipulations. But when the BPP brought him up for review, he was given a set-off for unsatisfactory institutional adjustment.

This is not an isolated occurrence. It’s everyday fare served up in Texas. Inmates are serving virtually all of their time. Or so much of it that you couldn’t tell: they’re doing eighteen on twenty; twenty-three on twenty-five; and thirty to thirty-five years on life sentences that, under many sentencing guidelines, only require them to do between eight and fifteen. Nine out of ten people serving fifteen years or less can just forget about parole. If they do happen to make it, they may have six months left to go on their sentences.

Others who find that they’ve made it out on parole are quick to discover that it’s not all gravy. The first hurdle to leap is the forfeiture of all the good time that he or she has accumulated over the years. In most cases, for those released on parole, anyway, this good time will constitute a significant chunk of time toward the completion of their sentence.

Before hitting the bricks, TDC gives each person a get- up a clown would be proud of, two weeks’ worth of any medications they are taking, a new social security card, and a check for fifty dollars (another fifty dollar check will be forthcoming upon reporting to their parole officer. I guess making them wait for the other fifty is their incentive to show up). A second check in the amount of any monies they have in the Inmate Trust Fund is given them, along with a voucher for a bus ticket. After that, you sign away your good time and they tell you to get to get the fuck out of Huntsville.

According to the November 2014 issue of Prison Legal News, Texas has almost 156,000 prisoners, the highest prison population of any state in the union. The Justice Department, if those clodhoppers are to be believed, says that it costs the State approximately $22,000 to feed, house, and clothe each prisoner per annum, with these costs rising as prisoners serve longer sentences.

Texas, however, hands out life sentences like water. Over and over again they ask money of the legislature for the building of more prisons due to overcrowding. Texas already has over one hundred and fifty separate prisons in this state. You’d be pretty hard pressed to convince me that the crime rate is so bad that we need all these prisons. Who’s going to protect us from our protectors?

Building more prisons is always accompanied by a rise in taxes. I mean somebody’s got to pay for all this shit. Within the last year, however, the State has been told, “You have a parole system. Use it.” So far it looks like they’re still trying to find where they misplaced it. It is rumored that one senator says that he remembers scraping it off of his shoe back in 1992. News agencies and radio stations like National Public Radio (NPR) haven’t been much better in their reporting. They are full of stories on prison reform and downsizing but so far it hasn’t been much better than gossip. Some report—even those working for the BPP in Austin and should know better — that the State is trying to filter out anyone that has over twenty years in the system, regardless of how much time they’re serving. If this is true, it’s not happening around here.

So the question, then, is how much time is enough to satisfy the State’s hunger for souls? For justice to be served, is the price of every crime, regardless of how large or small, to be the totality of a man’s life? Or is it just to be all of his productive years? Is what the world needs today a few more 60-something year old geezers sacking groceries? Will that be paper or plastic, Ma’am? In his disturbingly dark memoir, My Dark Places, the writer James Ellroy says that “Justice was politics and theater.”

Funny. That’s been my experience too.