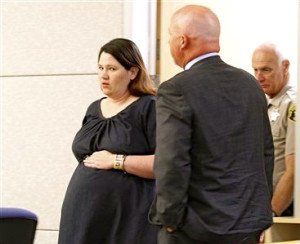 I was seven months pregnant when I was picked up for suspicion and noncooperation. Having never been arrested in my 36 years, my faith in the system was absolute. This is the 21st century and I know those involved in the crime will do the right thing. I would only need to be patient and wait, but my faith in the system and in people gave me confidence that I’d be home well before my baby was born.

In November of 2015, Dorothy Maraglino was found guilty of 1st degree murder along with two other defendants. She spent 3 1/2 years in jail awaiting her trial, and was sentenced to life without parole for the murder of a Marine’s wife.

That first week I slept in my AD-SEG cell [Administrative Segregation cell, Solitary] and measured time in hours. Any minute they’d open the door saying I was free. The hours slipped into days. The “good Samaritan” came forward and offered to take care of my home and be there for support. It’s all just temporary, we all agreed.

Those days became weeks. “It’s just a delay,” I’d tell myself when the panic wrapped around my heart like a hungry python. “The truth will come; the system will work.” My faith would not be shaken. As I lay in the bunk, I’d lay protective hands on my baby secure in my belly. I’d try to lay blankets over the belly to block the sounds of anger and desperation that the inmates screamed. I’d sing softly and ensure my precious baby
girl that she was safe and soon we’d be home. I told her all the things I needed to hear to keep the faith.

Those weeks became months and my spirit cracked. My daughter, the one I’ve prayed for and waited so long for, would be born to a jailhouse detainee. There would be no special welcome to this world. Her family would not be allowed to greet her. As she entered this world there would be minimal medical staff and two deputies. My pleas to be allowed my mom, a friend, please, I begged, failed. Let me have someone who loves me or knows me be there to greet my daughter. “You’re an inmate” was the reason for all the denials.

The day arrived and I still begged to no avail. I was to be in surgery all alone. To prepare for the journey I was placed in shackles and leg irons. I signed a paper to allow my ”Good Samaritan” to take my daughter to my home she now occupied. I’ll be home any day we all agreed. “Can she be allowed to be with me?” I asked, desperate not to be alone. My first delivery and every one around me are strangers. “No, you’re an inmate,” I was told.

While I wait for surgery, I read the cheerful brochure about how the baby will sleep in mommy’s hospital room. I begin to anticipate meeting my baby. “That doesn’t apply to you,” I was told “ you’re an inmate.” My baby will be kept three floors below me in secure N.I.C.U. [Neonatal Intensive-Care Unit]

She arrived perfect and her cries pierced my heart. I felt she was protesting my failure to give her the welcome I promised her since she was discovered. I held her mere minutes and then she was taken away, my leg was then chained to my bed and sleep gave me a brief reprieve from the battle of joy and grief. C.P.S [Child Protective Services] came. They found some red flags in regard to my “Good Samaritan,” but my faith would not be moved. It’s all temporary. She came and told me the guilty had confessed, I’ll be home very soon.

I followed every rule so I would be allowed my short visits to the N.I.C.U. My legs were chained to my wheelchair but to hold my baby I’d do anything. I’d shuffle my feet to the bassinet to change her diaper. I asked to breastfeed but the nurse asked “Why? You’re an inmate.” That simple act of bonding was denied me, so I used a bottle and swallowed my tears until I left.

The day came all too soon to leave. I held my precious child. She looked up with her newborn grey blue eyes. I promised to be home in a matter of days. I held her against my skin and made a memory of her smell, and the silkiness of her hair. I memorized that little dimple that hid just like mine. I changed her diaper for what I did not realize would be the last time. With every faith in the system and in my “good Samaritan” I left that life that lived so long within me back in the basinet. I looked to the Deputy and could only nod, not able to say the words that would take me away from my baby girl. The tears flowed but my faith was strong. “I’ll be home before the cord falls off,” I told myself.

The person confessed and the system works, I’ll be home soon. As the shackles were placed and I left the hospital my faith held tight. That day I left the hospital was 840 days ago. The “good Samaritan” lied. There was no confession. No truth was brought to light. The system was bogged down and so there has been delay after delay.

I have been in custody 920 days awaiting a trial. My faith is no longer as strong. When my ”good Samaritan” then stole my daughter and worldly goods and left, I begged the police for help. “Sorry you’re an inmate,” was all I heard. No report would be taken. I called for legal help but guardianship is a civil matter. No lawyers will help an inmate. I can prove it’s kidnap by fraud. “Tell me about it when you’re not in custody, “ the Sgt. says. “No one will believe you. You’re an inmate.”

My rights are not gone but I cannot use them. I’ve had no trial so I’m not guilty but no one sees me as innocent. I’m not a convict with prison resources, I’m a detainee in the local jail.

I’ve missed 840 days of my daughter’s life. I did not see her eyes turn the baby brown that mirror mine. I missed the promise to be home before the cord fell. I’ve missed three Christmas and two birthdays, her first step, her first word, first tooth and every first. On the rare visits I get to see my child who came from me, I see the stranger whom I called a good Samaritan turn thief with my child. That name that I waited all my life to hear – mommy – is now said to the thief, not me!

I can do little now, but I try. My faith forces me to believe that the system that made me an inmate, will restore me so I can be the rightful mommy soon. 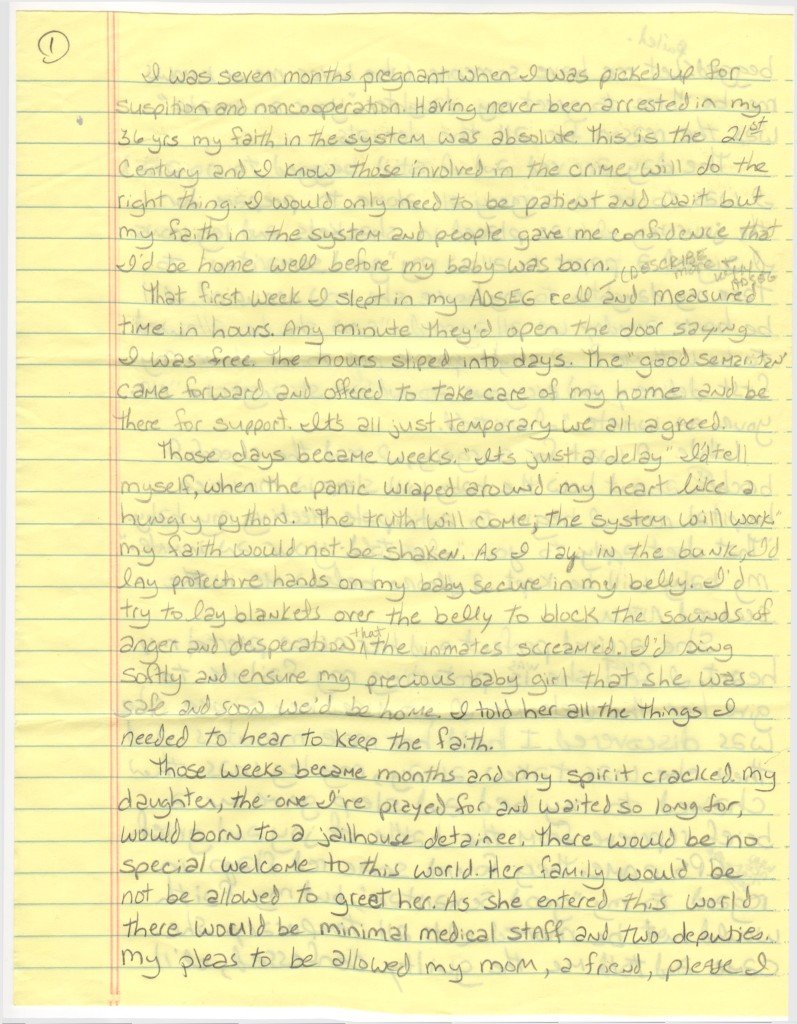