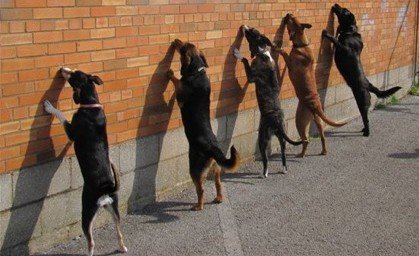 When the prison I’ve grown up in partnered with a local animal shelter and a service-canine organization to start a dog rehabilitation and training program, it had been nearly 4,000 days since I had last seen a dog in person, last had one sniff my hand, lick my face… since I ran my hand through one’s fur. The only animals I had seen had been on television, or the few that had wandered around outside the triple razor-wire fences abutting woods and a swamp; or the even few that had found their way in through a drainage pipe to wander around the prison yard. Deer and turkeys pranced around outside the sunset-side of the yard in the evenings; and robins, blue jays, finches, hawks and even a few bald-eagles flew around, nesting on the sunrise side. A couple groundhogs made the empty space around the drainage culvert inside the fence their “chow hall”, along with the occasional raccoon or two and even an albino skunk. But nothing with the familiarity that dogs offer: that comfort that makes you desire to go meet them.

I had a dog growing up, a gorgeous long-haired dachshund. I trained her, and other dogs, and never met one (at least after a proper introduction) that I didn’t feel comfortable around. I wasn’t Caesar Milan, but I loved animals and they always seemed drawn to me as if I were a snack. I had never met a dog I didn’t like, or that I couldn’t get along with.

Fast forward eleven years, and rumors that the dog program was coming to the prison had been going on for months, if not a year or more. No one really thought it would actually happen. I advocated for it when I could. When it started to seem like a real possibility, I told everyone I could inside to write letters (kites) to the administration to encourage it. I told everyone about how much I was looking forward to having them here.

Before they brought the dogs in, they initiated a screening process. I was one of the first people asked if I wanted a dog. But already having the best job in the prison –teaching in the Food Technology class, essentially a culinary arts class where I get to eat real food for two meals– and we aren’t allowed under any circumstances to have more than one job.

“I really would like one, C.O. It’s a difficult decision though. It’s the only other job here I’d want, but I just can’t quit the one I have.”

I really wanted a dog though. I craved that affection that otherwise doesn’t exist inside prison, where I’ve been since I was 15 years old.

Then they brought the dogs in, just a week or so before my 26th birthday. The first time anyone (other than the selected dog- trainer inmates) saw the hounds was at night, through the windows in the front of our unit, when the dogs were taken out to use the bathroom. A group of my friends and I huddled around the window, the officer allowing it since it was something worthy of attention.

As they came out, one-by-one, these pure-bred labradors and golden retrievers with tails wagging, these beautiful, Kennel Club-worthy canine specimens, looked… unfamiliar… strange. I pressed my face against the window, rubbed my eyes, but these animals, so like my former pet, appeared to me as… creatures. They seemed more wild, less real, than even the deer or eagles.

“Dank, you wanna come meet my dog?” Asks Rodriguez the next day on the yard.

Walking up on me from behind on the track with his dog, he stops and tells his dog to sit. I look at Niko, a golden retriever that looks like he belongs in a Disney movie, and I felt something that I hadn’t felt in a long time: hesitation. I thought that spending half my life around people, good and evil, that I have had destroyed any feeling of anxiety inside me. But when Niko approached and tried to lick my hand, my instinct was to pull my hand away from his touch. Niko, stopped by the leash, just stood there with his mouth open, panting, wagging his while my  subconscious froze me in place.

I wasn’t worried that the dog was going to bite me. Niko, smiling if a dog can smile and with the same color hair as my first crush, made me nervous for reasons I really wasn’t sure of at first. Was there something wrong with me? Was I scared that somehow I might accidentally hurt him? Touch him wrong? That once he got closer, he really wouldn’t like me? Grown men, dangerous men, human monsters didn’t scare me, no matter their size. But what was in this little dog that backed my hand away?

“Just let him lick your hand. He likes being petted behind the ear…”

It had been so long since I had any affectionate contact, real contact, since I had given any to any living thing of any kind. In that moment, what I felt was the unknown… not knowing how to deal with the emotions I felt welling up. Not of being frightened, not of being scared of the affection. The terror I felt in that moment was from being forced to acknowledge an absence I’d pretended every day to ignore, to harden myself against. Institutionalization isn’t the insult of the constraints the state puts on us. It’s from the barriers we build up in ourselves, to protect ourselves, to pretend that nothing else really matters. And this beautiful, friendly dog was shattering that to pieces.

Niko almost devoured my hand, not with teeth but with licks. I ran my hand down his silky coat, and as a reaction he twisted around and leaned his whole body against my legs, his wagging tail whacking the back of my knees. In an instant my anxiety fell, and I leaned down to give the dog a hug. Covering my face with kisses, he laid down on my shoes as I scratched behind his ear. My hands ruffled his fur, and for a moment, I felt free.

A year later, out of thirty or so dogs at any given time, I can name 25 of them. While still not a trainer myself due to my other job, I have worked with multiple trainers and helped train and teach these young dogs new tricks. I watch as a friend of mine, a 36-year old juvenile lifer with a history of violence in and out of prison, transforms into someone completely different around these dogs, being given the most abused, difficult-to-train dogs to rehabilitate because no one else can work with them. And the dogs listen. And when I listen to the dogs, I smile more than I ever have in prison.