A 2-Year Old Boy Lights Up This Lifer’s Life

AN AMAZING SIDE NOTE about Leonard:

Agnes Fury is the mother and grandmother of author Leonard Scoven’s two victims. Years ago, she contacted Scovens in prison to find answers and closure. Amazingly, their relationship turned into a friendship after the two corresponded for years — before the two published a book together about restoration and forgiveness, called Wildflowers in the Median. (!) 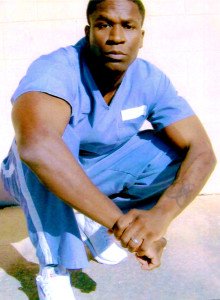 I see our ancestors jamming, praying, singing in his eyes.

We’re separated by a piece of Plexiglass crisscrossed with steel wire designed to cage me in this prison that has striven to become my home; but my two-year old nephew Ja ‘Shua is irrepressible. The reinforced steel, tough-talking guards, the violent clang and clamoring weight that slams on the spine of anyone entering a prison for any reason at all do not disturb his groove. His eyes are chocolate vats of vibrant soul spilling through the barrier between us.

“I know who you are!” he seems to be saying.

My grandmother, step-grandfather, and uncle Bob’s voices are muffled by the walls and glass dividing us as Ja ‘Shua captures me with those eloquent eyes.

He is silent … small hands stuffed in his OshKosh blue jeans a smile playing on his lips, joy so obviously bubbling in his bones.

Ja ‘Shua is my baby sister Erica’s little boy and the first of a new generation. He is the only young male in our family left free and alive. His other uncle, my little brother Andrew, banged a bad spoon of dope last year and left us.

According to the State of Florida, I’ll be buried in the joint until I die, having been condemned to a Natural Life sentence.

Ja ‘Shua is all we have left of our young manhood.

It’s amazing to some of us in the family that Erica survived long enough to have him. Little sister had a rough start. She was expelled from Kindergarten for slapping the taste from her teacher’s mouth.

Constitutionally incapable of sitting still, Erica was like an electron streaking through space in a nano-box, bouncing off the walls at near the speed of light. Like her son, she was irrepressible.

She struggled alone over the years with sexual abuse at the hands of her step-father, alcohol and crystal meth addiction conspired against her and she was as prone as her other had been to forever choose the wrong sort of man; but she marched valiantly through her many disasters using her quick laughter and pride to slash and burn the hell hounds on her trail.

Ja ‘Shua, her spirit’s spitting image, is the fruit of her courage and victory.

He presses his palms against the Plexiglass and I meet him there with mine. He smiles as he snatches his hand away then raps the window with his little knuckles. I do the same and we’re swallowed in one another’s laughter.

I swallow down the need to hold him and smell his warm little boy scent to reassure myself that he hasn’t been tainted by the ugliness that frayed my heart and thrust me into prison, the ugliness that murdered Andrew and had threatened to pound Erica into the dust as well.

I’d know if it was there. I’d recognize it. The fear risen from having been beaten, screamed at, ignored. It was a friend to me as a child. A constant companion. Each slap, kick, punch, each shove fed it until it grew to be anger. Kindled to rage. Colored each destructive choice I’ve made in life. Got me here, buried alive in this place that locks me away from my nephew’s arms.

But I don’t see any of that in Ja ‘Shua’s eyes. There are only those vibrant ancestral melodies within them, accented by the glee in his laughter and the quiet knowledge that he is safe and free and loved.

What I see stitches some of the holes and straightens out a few of the kinks in my tattered heart.

I envy him as I study what I see of my brother and sister crackling in his eyes. Little man has all of life stretched wide and unblemished before him. He is absolutely pregnant with possibility. No path is closed to him, no journey unthinkable, no height unattainable. For an instant I want to scream. Laugh. And pull him close, wrap him up in my shank-scarred arms and whisper: Don’t be like me. Don’t believe in whatever comes to hurt you. Live whatever you dream.

He cries when it’s time to go. The bitter sound of it drifts farther and farther away as I sit behind the glass starting at my hands. The last of his cries are cut by the steel bite of barred doors slamming closed.

I touch the skin beneath my eyes with my fingertips. They come away glistening. I wipe my face with the back of my hand — can’t return to the cell block with my soul on my face.

Five pounds of iron chain rattling and clinking hip me to the guard cutting the corner and moving toward the cubicle I’m sitting in.

He takes me out of the cube, wraps the iron around my waist, secures my cuffs to it, then shackles me.

Ja ‘Shua gleams in the corner of my mind, his eyes radiating something like love.

I can’t feel the iron no more dragging me down.

I am someplace else.

For a few moments, I am free.

Leonard Scovens is serving two consecutive LIFE sentences for the murders of his girlfriend and her 6-year old son.

AN AMAZING SIDE NOTE about Leonard:

Agnes Fury is the mother and grandmother of author Leonard Scoven’s two victims. Years ago, she contacted Scovens in prison to find answers and closure. Amazingly, their relationship turned into a friendship after the two corresponded for years — before the two published a book together about restoration and forgiveness, called Wildflowers in the Median. (!)