This is Jermaine Archer’s bio, in his own words: 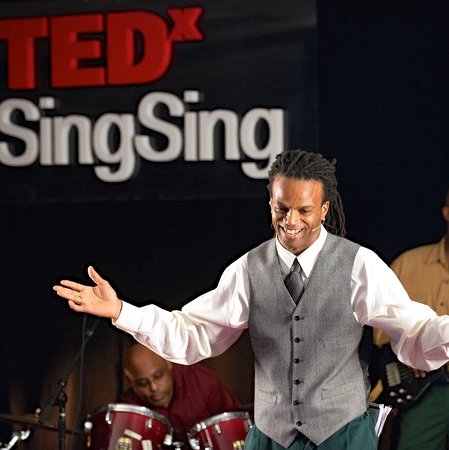 Jermaine Archer is a Brooklyn native and the seventh of twelve siblings.

While he admits to engaging in a reckless and dangerous past, he is presently incarcerated for a murder he did not commit.

In prison, he searched himself and, not liking the individual he encountered, decided to rise above his circumstance and be the best “Jermaine” he could be by focusing on his passions: languages, education and young people.

Today, he speaks, reads and writes Spanish and French and is currently studying German. Jermaine co-created the first and only Chinese Mandarin Language Course to be taught inside a New York State prison.

His many educational and therapeutic accomplishments include earning his Bachelors in Science from Hudson Link/Mercy College and his Master in Professional Studies from New York Theological Seminary.

As an advisor to The Osborne Association’s Children With Incarcerated Parents Initiative and a member of the Youth Assistance Program (which allows incarcerated men to share their life experiences with community youth to help them make better decisions), Jermaine continues his life’s mission of aiding young people.

Jermaine Archer doesn’t include the following in his bio: He was the M.C. for a TEDx event held at Sing Sing State Prison, about an hour north of New York City. Jermaine’s photo, seen above, appeared in the New York Times. Credit: Andrew W. Dwyer

Along these lines, Jermaine co-founded Forgotten Voices/Voices From Within (FV/VFW), a group of men who decided to redefine what it means to repay a debt to society. To date, FV/VFW has raised approximately $8,000 in prisoner-donated funds to sponsor a community gun buy-back. Jermaine has worked with NBC Dateline producer Dan Slepian to produce a short film aimed at reducing youth gun violence.

However, Jermaine is most proud of his status as a good son, husband, brother, uncle, father and stepfather.

We send your comments to our writers on a weekly basis but if you’d prefer to contact this author directly, please write to:

Her Name Was Mo And She Brought People Together

Some people knew her as Arlene Mohammed, but her name was Mo and she brought people together. Mo was a strong black woman from another era, the one that followed Jim Crow but preceded Civil Rights, the one when black men [...]

In 1992, summer in Brooklyn, New York came early. We had “permanent beef” with a West Indian crew, which meant trying to terminate each other on sight. Gunshots sparked so often that Flatbush residents didn’t have to wait for the [...]

One day I was returning from the morning yard recreation. As I neared the entrance gate, I heard a "Thwap!” and saw a body fall to the concrete few feet ahead of me. Instead of anyone rushing to his aid, the [...]

Acts Of Kindness Are Rare in Prison But This Really Happened

What would you expect to find in a maximum-security prison? Convicted felons? Of course. Spontaneous violence? Check. Gang members? Plenty. Humanity? Come again? “This is the last place I’d ever want to be sick,” I thought as I stared at the [...]