This is Derek Trumbo’s bio, in his own words: 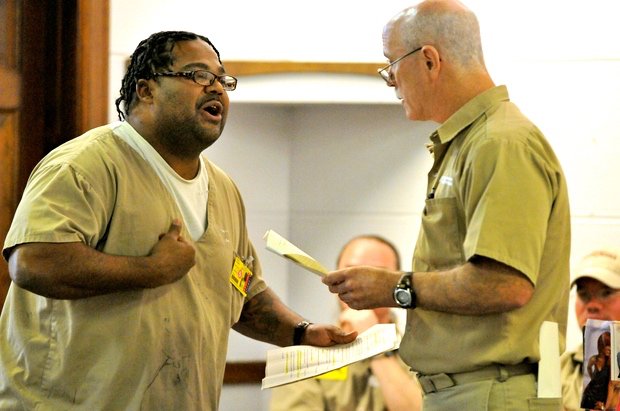 Derek grew up in the West end of Louisville in a biracial family. Raised by bricklayers, he spent his childhood learning masonry skills from his mother and father.

Derek enjoys reading and he learned to express himself while studying playwriting [in prison, at Northpoint Training Center through a program called Voices Inside/Out, created by Pioneer Playhouse and cofounded by director and screenwriter] Robby Henson, also the Managing Director of Pioneer Playhouse, Kentucky’s oldest outdoor theater.

[Voices Inside/Out offers weekly playwriting classes to prisoners at Northpoint Training Center in Kentucky. “Participants write ten-minute plays, complete with draft readings, the usual parade of revisions, and performances for each other. At the end of August, the best of the inmate-authored pieces are performed for the rest of Northpoint, with all acting done by inmates and a few guest artists from Pioneer. A professional performance by Pioneer actors is also staged at Northpoint each summer. For more information, check out Voices Inside/Out.]

[Derek failed to mention that his short play, Conviction, won Best Drama in PEN’s 2013 Prison Writing Contest and was performed in front of Northpoint’s general population, as part of the Voices Inside/Out program.]

Trumbo plans to one day have his plays produced worldwide and is fortunate to have found an outlet such as PrisonWriters.com which presents a forum allowing awareness of circumstances surrounding those who are incarcerated. Silence is no longer acceptable.

After a hung jury in his first trial for sexual abuse of his stepdaughter, Derek Trumbo was found guilty in his second trial, based on the girl’s testimony. He has spent the past decade proclaiming his innocence and appealing his conviction.

We send comments to our writers on a weekly basis, but if you’d prefer to contact this author directly, please write to:

Who Killed My Cellmate?

I've always turned to literature as my means of escape, especially in the midst of painful situations and despair. So, it's only fitting that I would relate most with Virginia Woolf the night I'd find my bunky lying dead on a [...]

A Cho-Mo’s Rape in Prison

"It lasted all night. I stayed up, hidden under my cover, scared that they'd find out about me. About what I did. I pissed myself. Then morning came, and the gossip found its way around. They'd lodged the broken mop handle up inside the guy. Smurfette made sure that he had a breakfast tray, and fed the guy because he couldn't do anything much but moan.
By Derek Trumbo
Prison Writers Staff2020-08-25T13:59:03-04:00Prison Love and Sex|

The first time I saw the man everyone called “Helluva,” I found myself wondering, what does that have to do with the price of tea in China? Much later after observing, meeting, and coming to know this person for who [...]

Was Medical Neglect The Cause of Kentucky’s Prison Riot?

A reality of walking through the gates of prison is there’s a possibility you may never leave. Anyone entering those gates has to be careful; you don’t want to pick up something you didn't come with. This warning relates to [...]

The man’s kissing a skunk...in a photograph, that landed him in the hole for ninety days. The photo was used as evidence to convict him of the write-up. To him, the conviction and subsequent hole-time were worth it. He got the picture [...]